The main goal of this trip was to visit three of the most important Mayan archaeological sites: Palenque in Mexico, Tikal in Guatemala, and Copán in Honduras. While planning the trip, I looked at several ways to travel between my visit of Palenque onward to Tikal.

I found a pretty interesting option that would take me into the heart of the Lancandon jungle which lies on the border between Mexico and Guatemala. 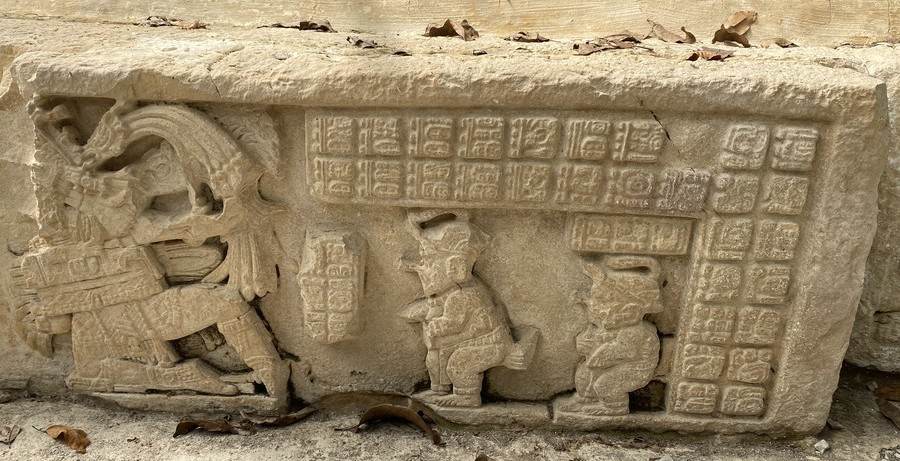 In Palenque, my tour shuttle arrived 15 minutes early at 5:45 AM. I boarded the van joining travelers from Mexico, Australia, and South Korea. I was the only American aboard.

An hour into the drive, we stopped at a roadside “comedor” for a buffet breakfast served in an open-air venue with chairs made of tree trunks and a dirt floor. 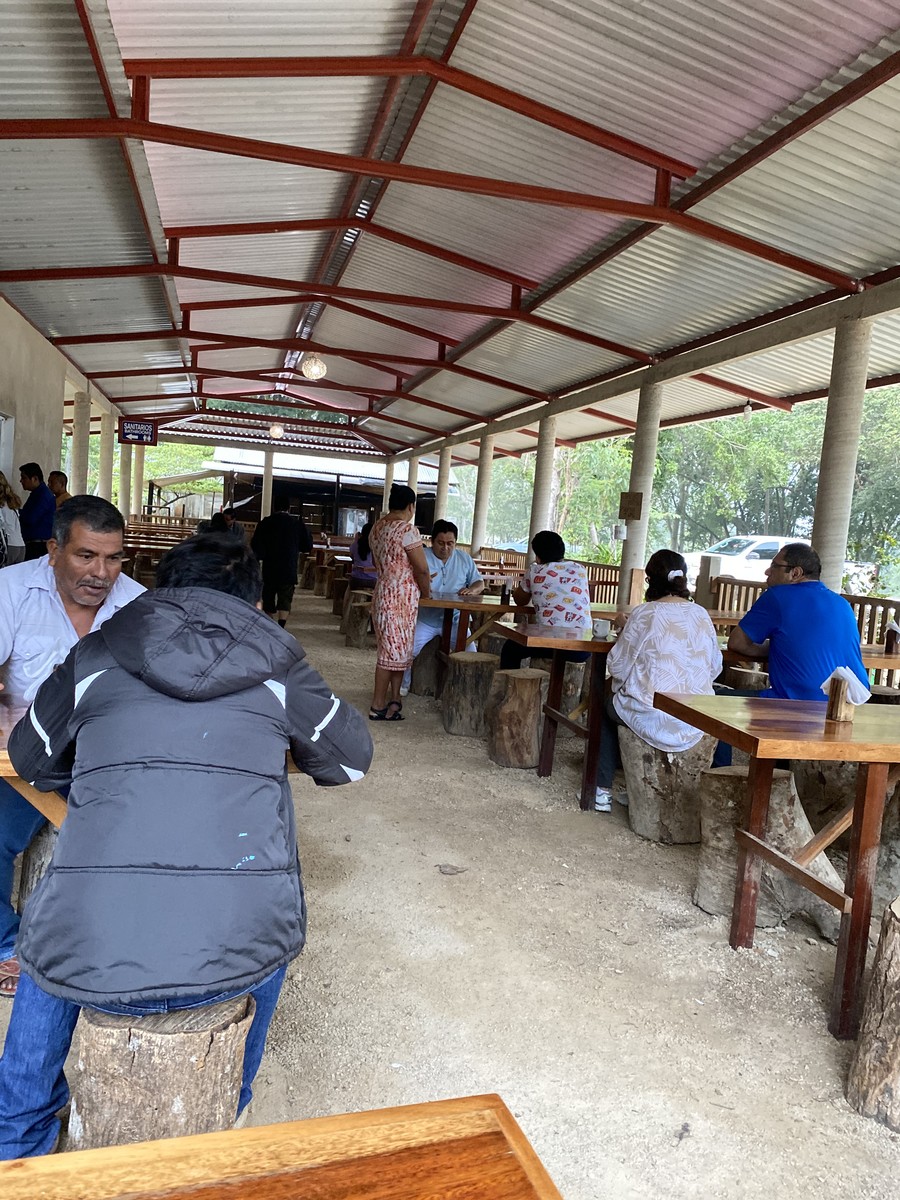 It was a typical desayuno Chapaneco or Chiapas breakfast: eggs scrambled with tomato and onions, rice, beans, fruit, and papaya juice. 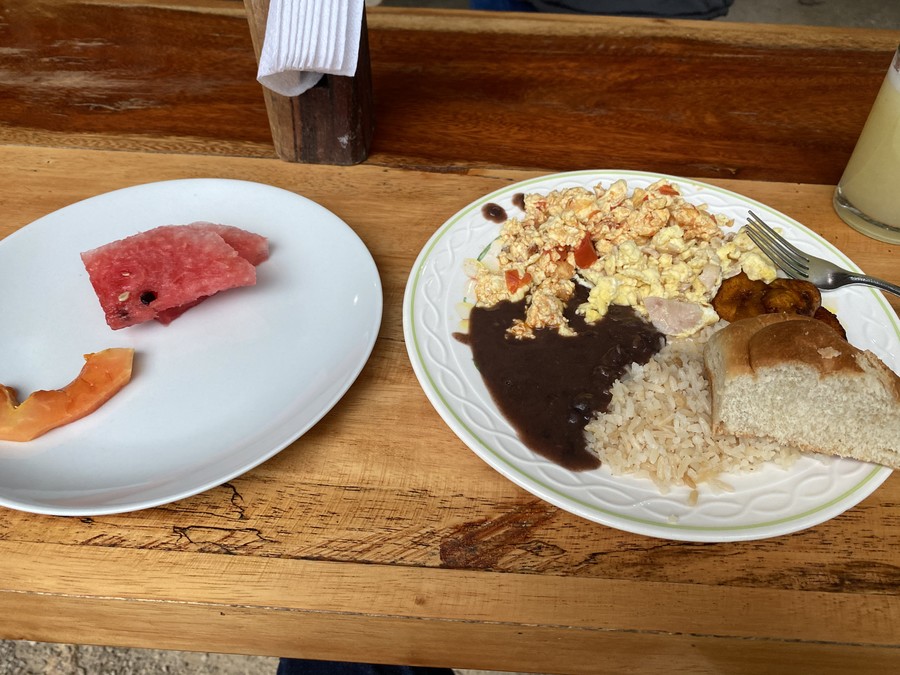 The drive continued for two hours more, and as we neared the end of the trip the jungle became more dense. Like most rainforests in the world, the Lancandon is under considerable pressure from farming, mining, and logging. It is estimated that only 10% of the virgin rainforest remains, almost all of which is located along the border region where I was headed.

The first destination of the day was the Mayan site Yaxchilan. Our van pulled into Frontera Corozal, a dusty little town of 5000 people located on the bank of a large river. We all hopped out and climbed down the steps to a small dock. 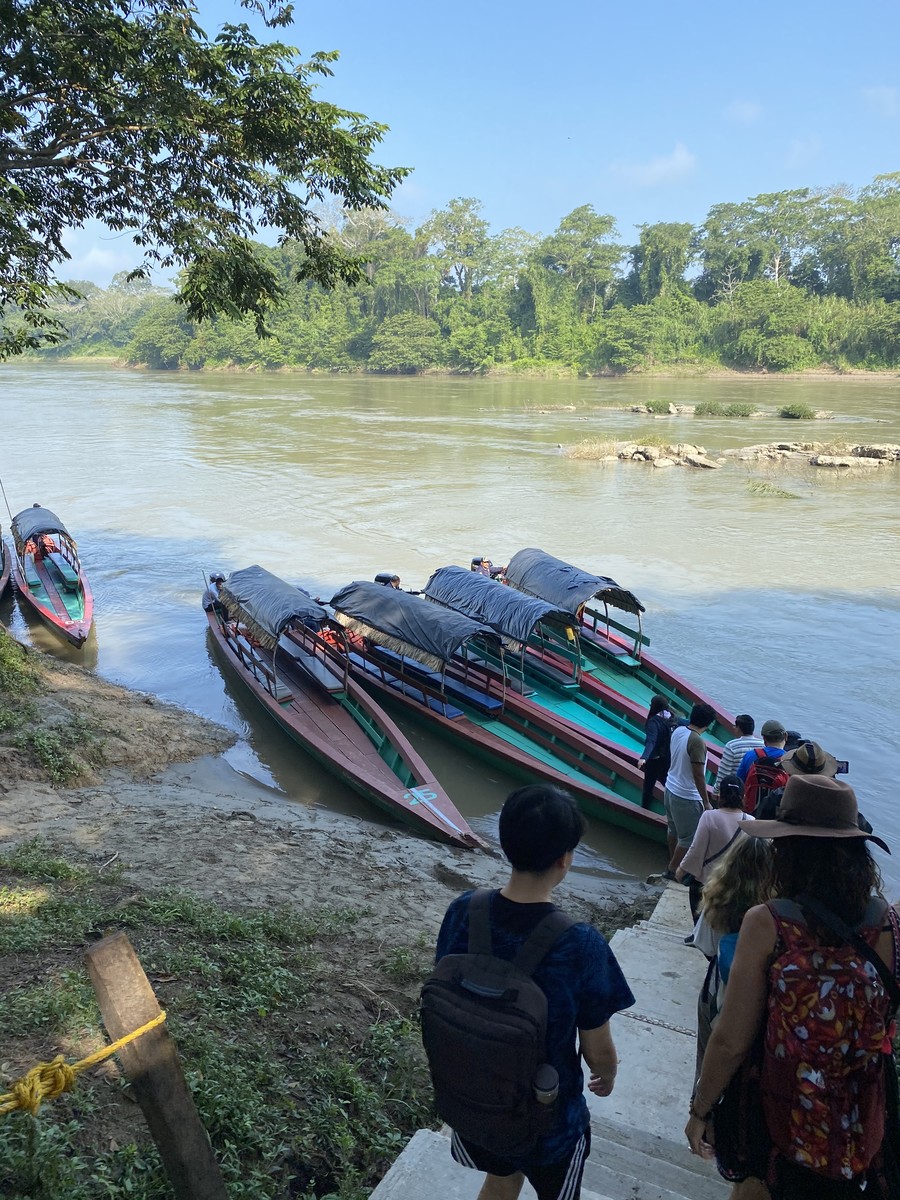 We boarded a lancha, a small narrow boat operated by a local cooperative called Escudo Jaguar, or Jaguar Shield. Lanchas are the main transportation in this area, shuttling tourists to Mayan sites and locals across the river to Guatemala, since the nearest bridge is a two and a half hour drive away.

The 45 minute boat ride to Yaxchilan was a fun beginning. 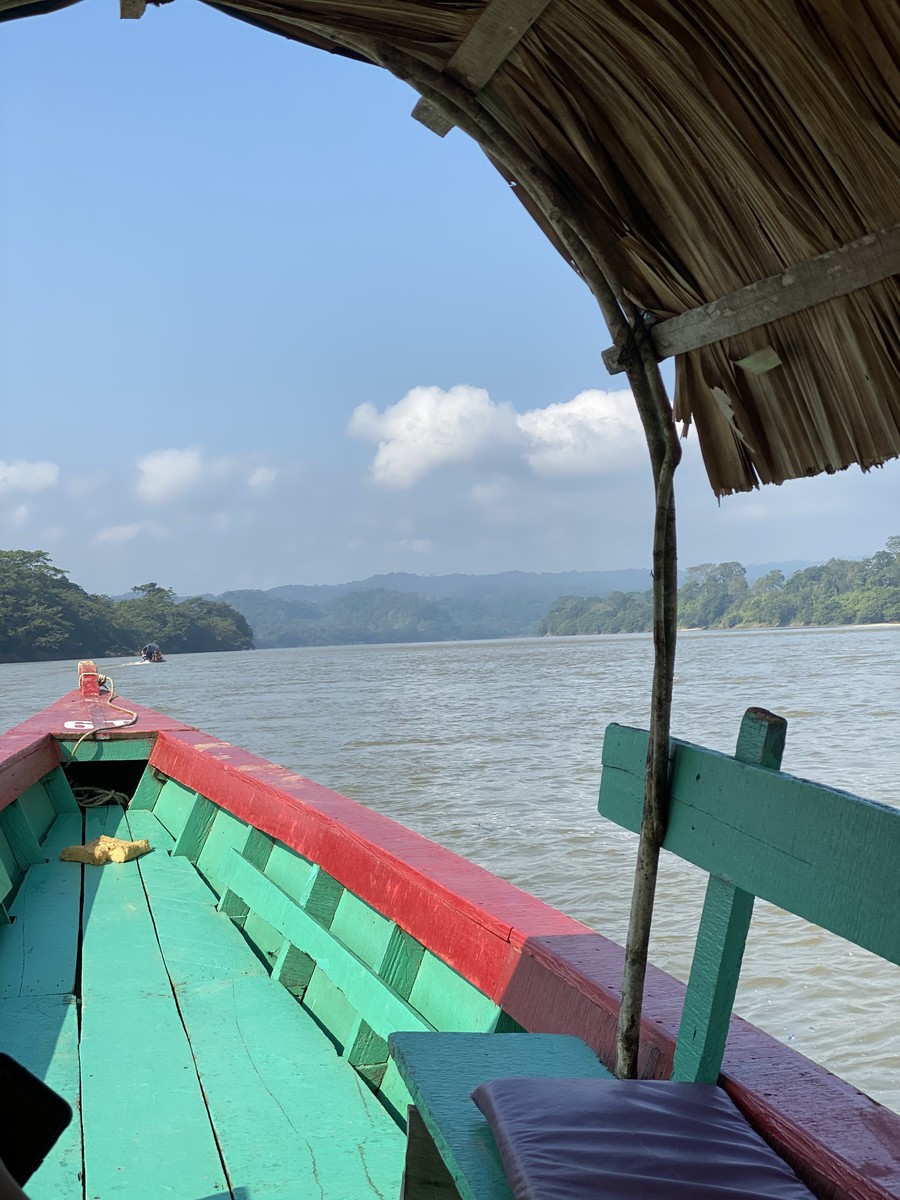 With eyes freshly trained for wildlife during my Sumidero adventure, I spotted a crocodile on the riverbank, and our boat paused briefly to see him scurry into the river. My photo unfortunately shows nothing but a dark spot on the shore.

Finally, as we rounded a huge oxbow bend in the river, ruins started to peek out of the jungle cover. We had arrived. Climbing the steps up from the river was like walking back in time more than a thousand years. 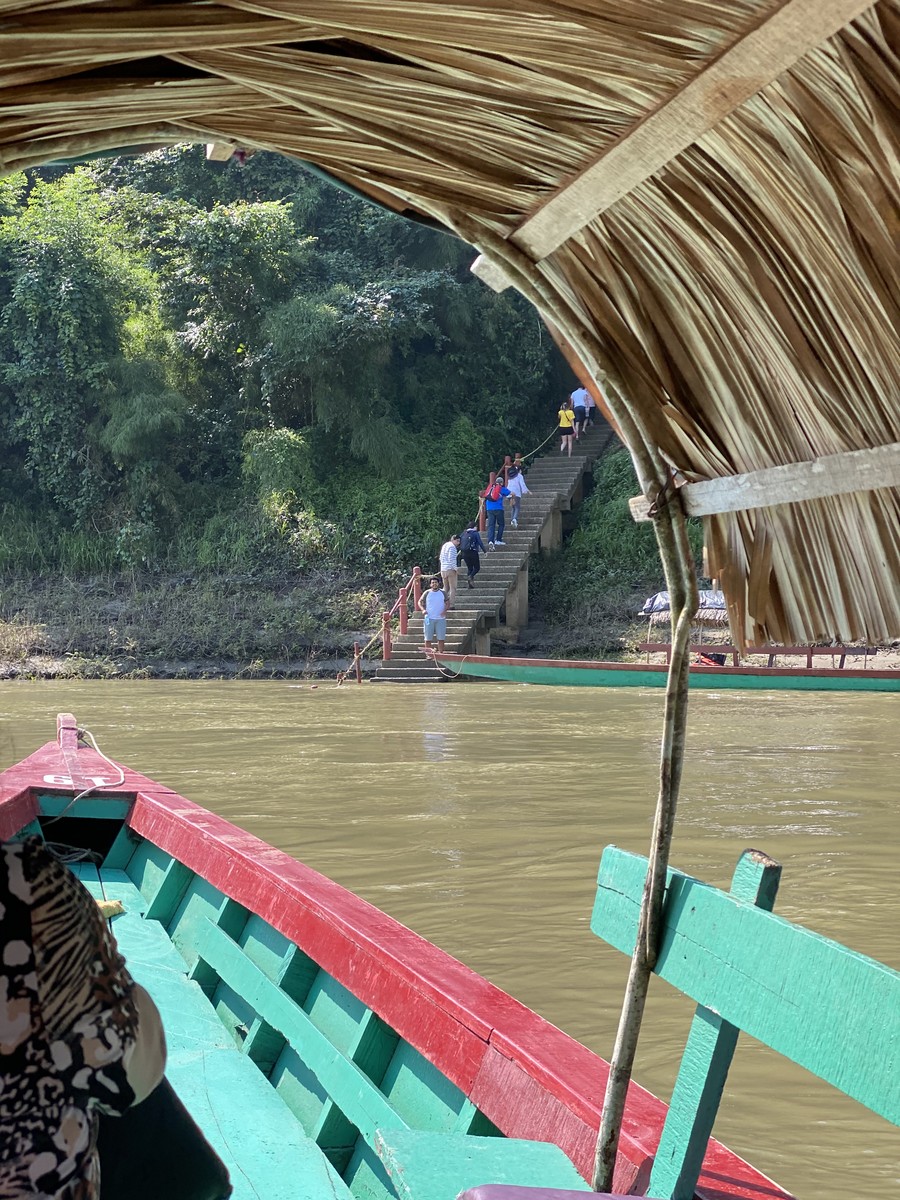 More of the site, and some local wildlife in my 4 minute video:

It is easy to see why the ancient Maya picked this spot for such an impressive stronghold. Although covered now by jungle, this outpost on a hill offered commanding views across a massive bend in the river, letting the Maya control commerce in their day. 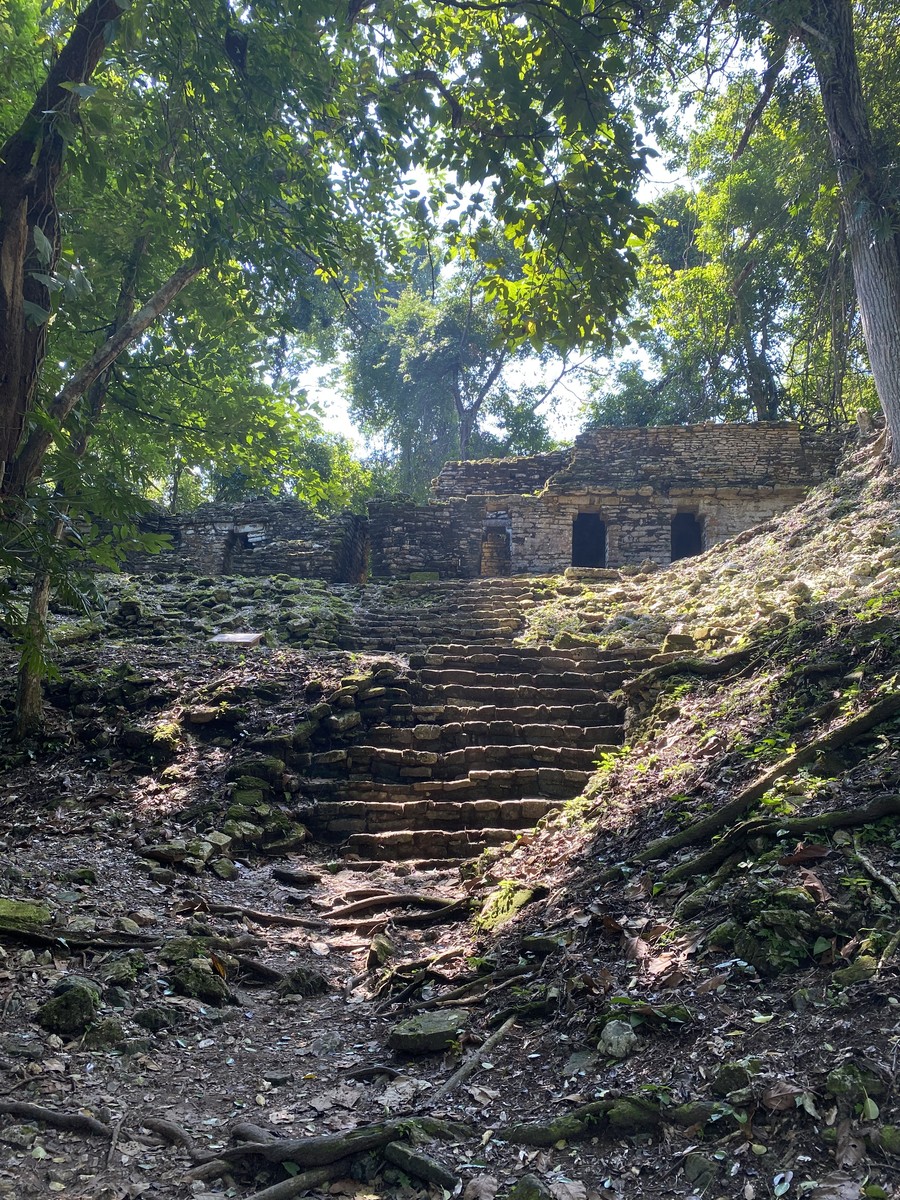 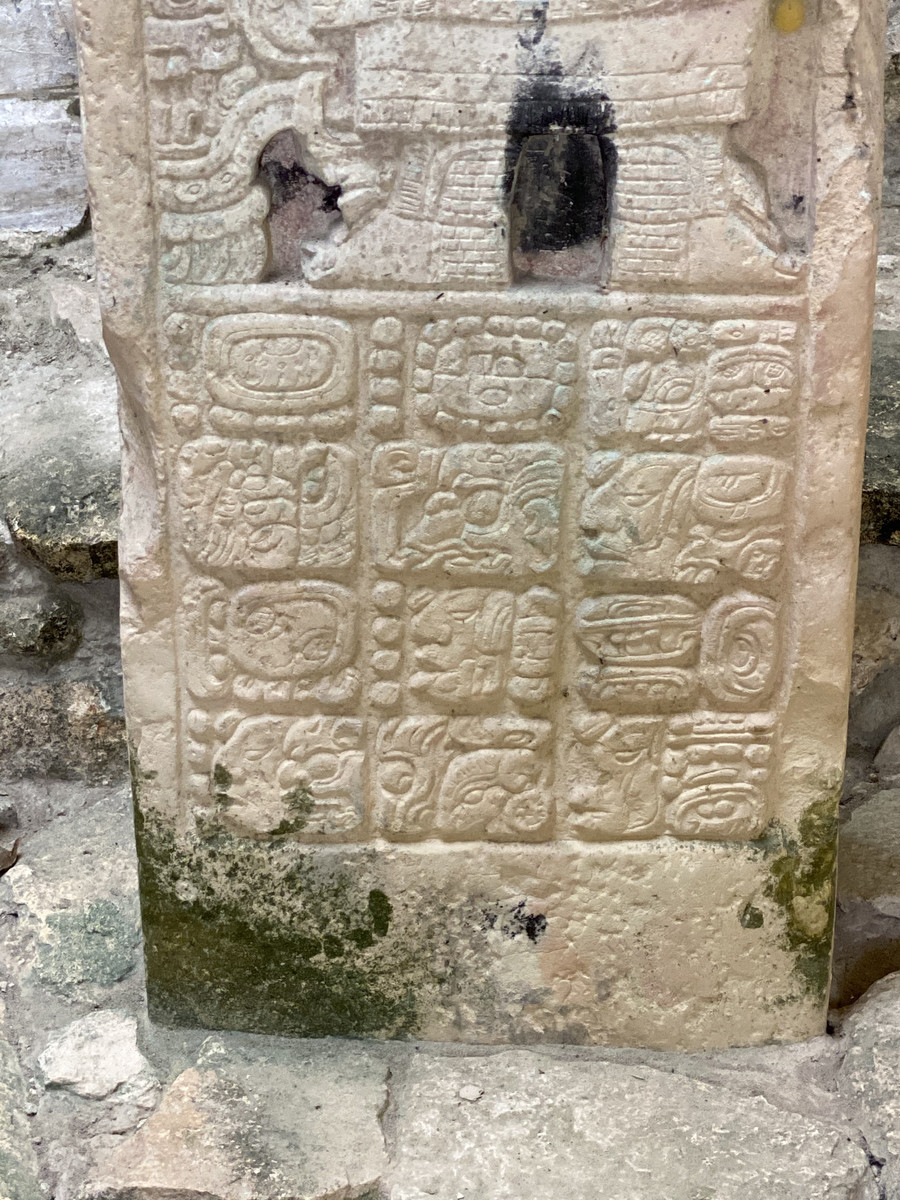 Don’t forget to look up when entering a building… 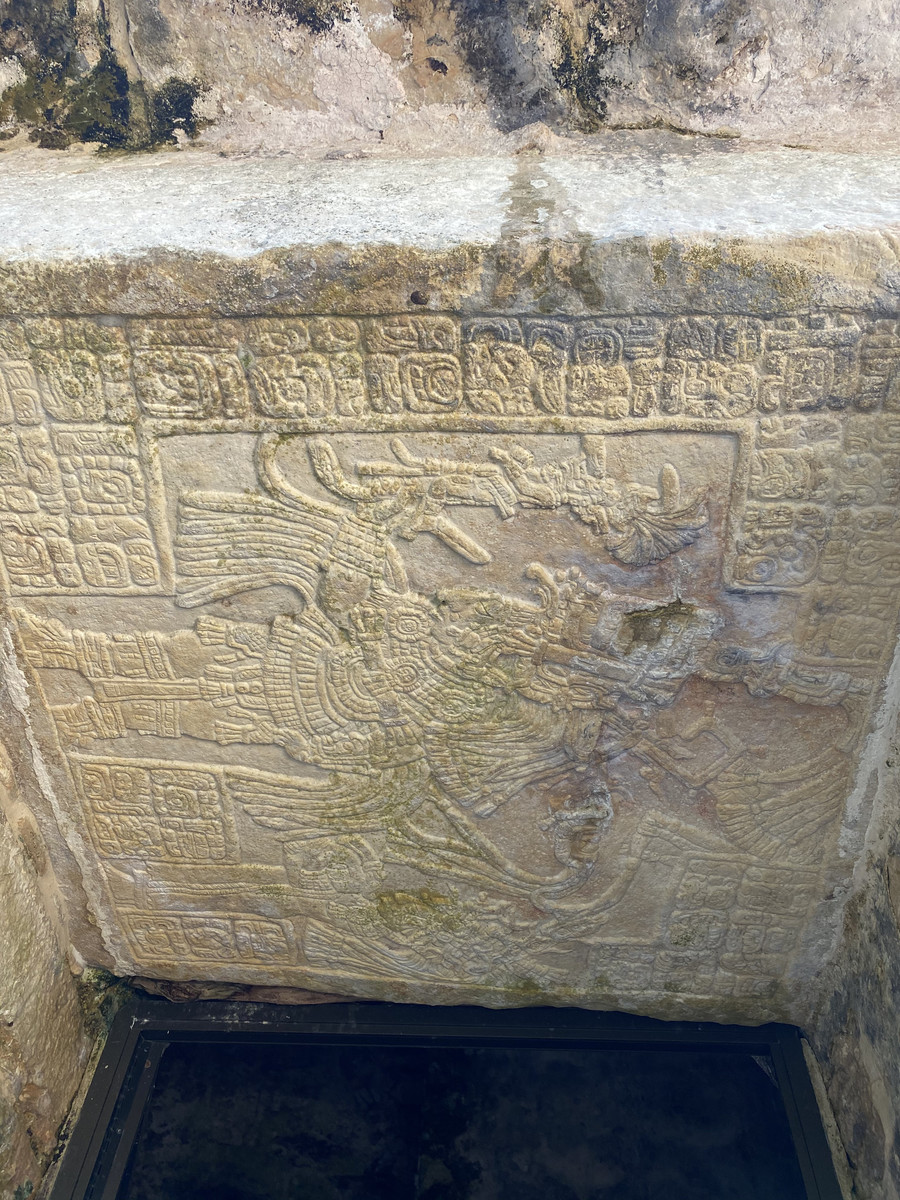 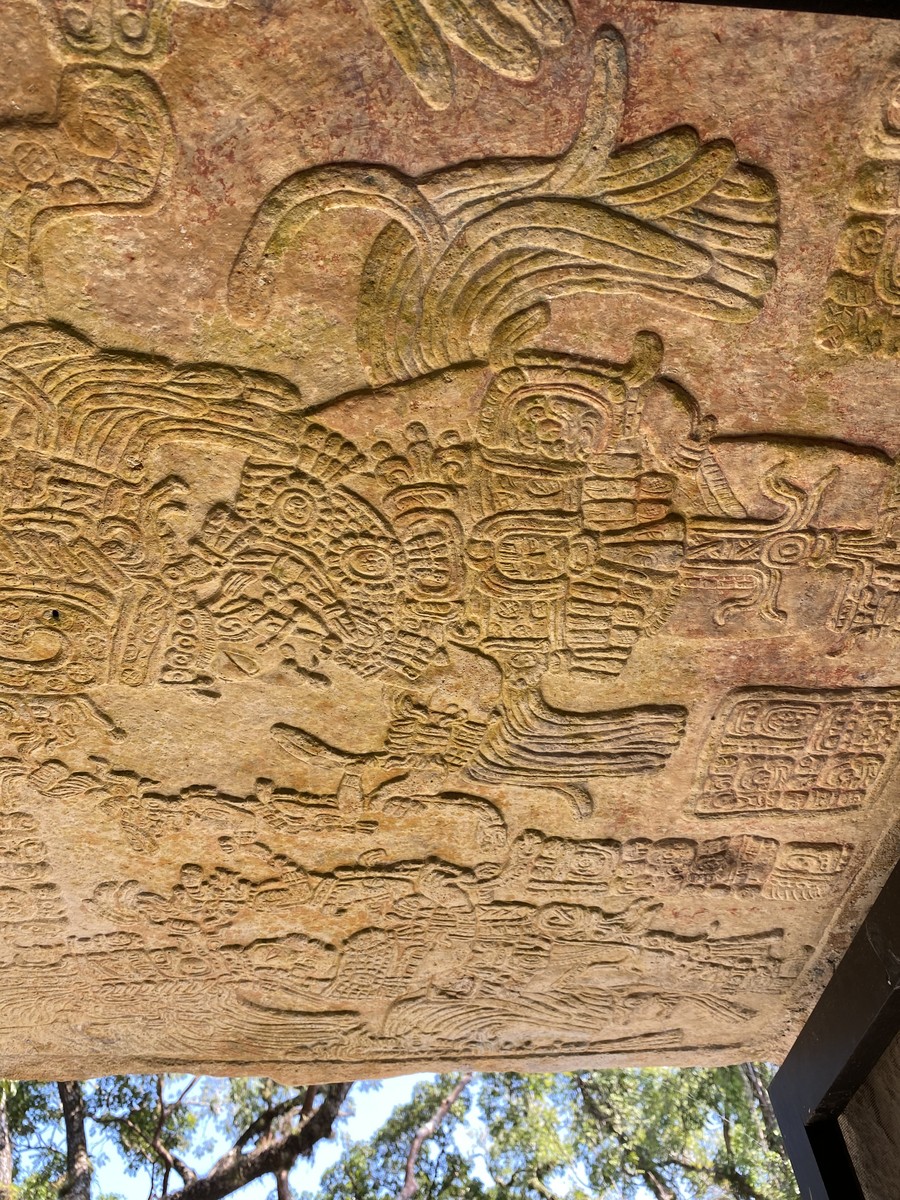 After a couple of hours at the site, we took the boat back down the river and had lunch in Frontera Corozal.

Bonampak and the murals

We then left the river behind and drove an hour back into the jungle. The afternoon destination was Bonampak, a Maya site that is famous for the colorful murals that appear inside one of its structures.

At the entrance we were required to swap vans since the local Lancandon people have a monopoly on transportation into the archaeological site. It’s a source of much needed income for these modern-day Maya, many of whom still live a subsistence lifestyle in the rainforest. 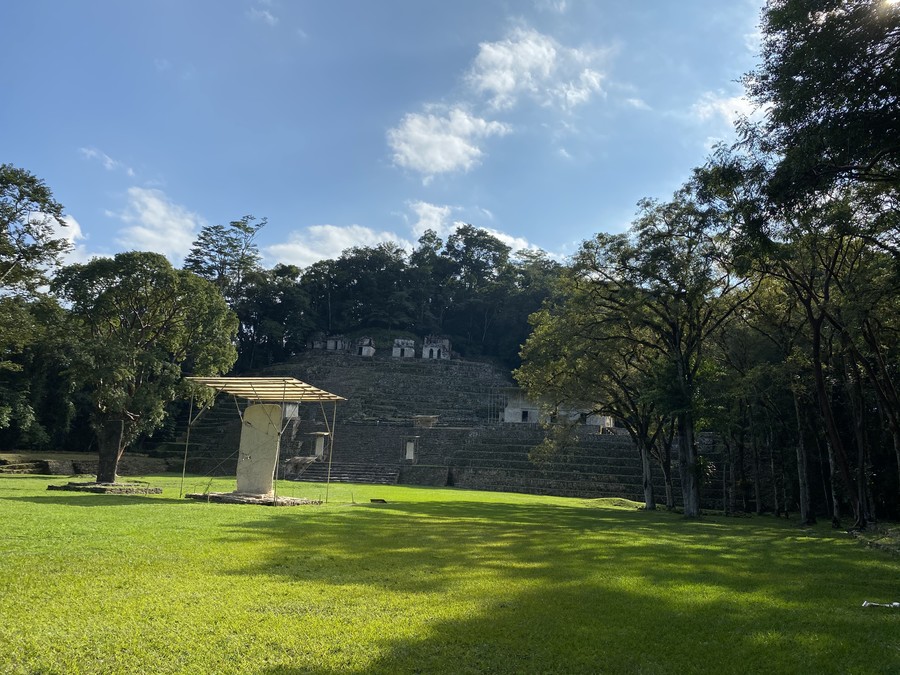 The site itself is quite small, and upon entering it you see most of the structures around this one large plaza.

But the main structure is impressive, covering the entire hillside with a massive wide bank of steps. 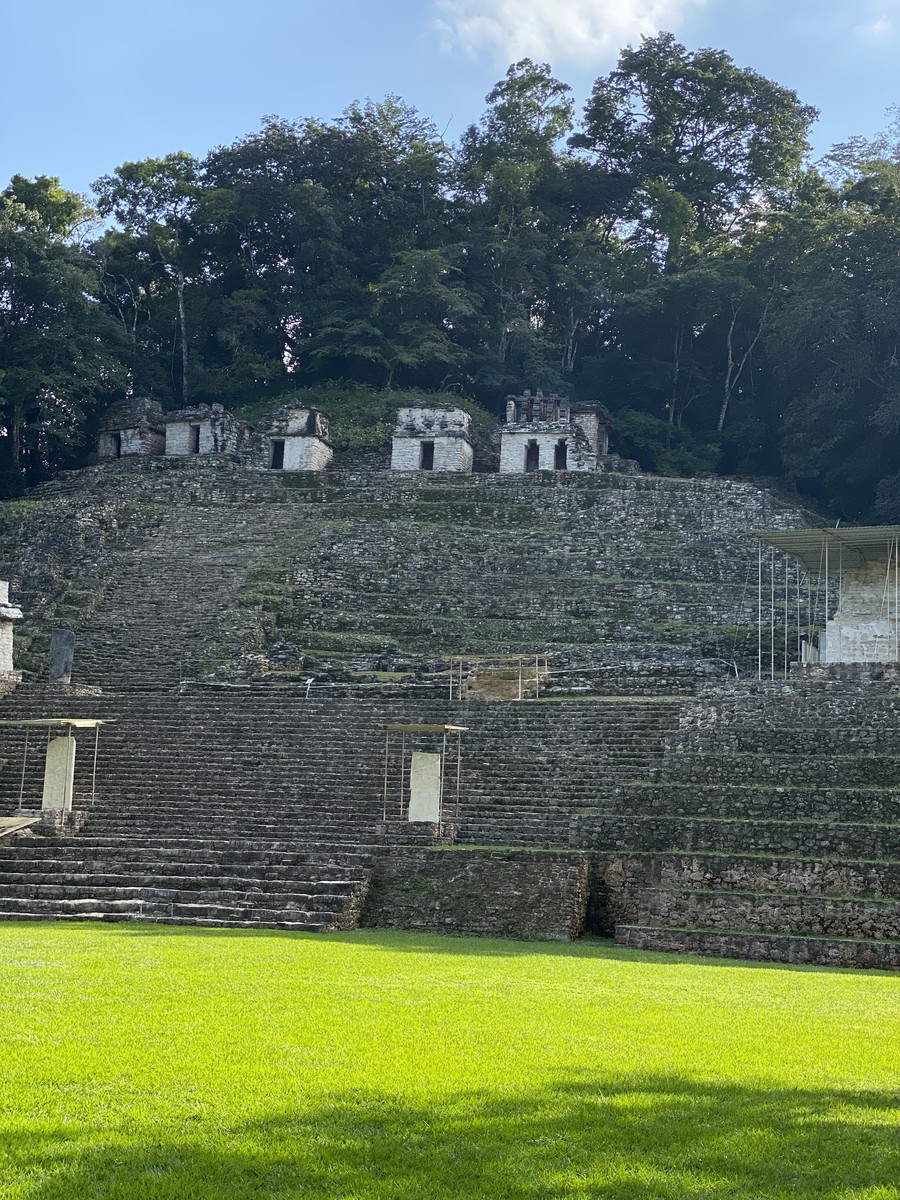 The murals are in the white structure midway up on the right side. 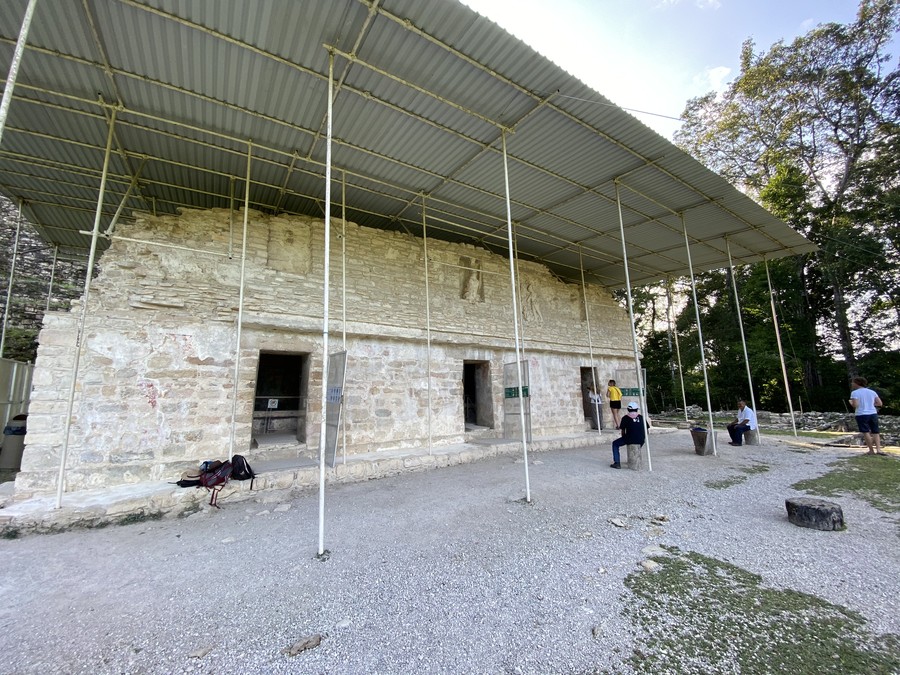 There are three rooms with paintings. Entry into each room is limited to three people at a time, so I headed there immediately before the other groups of visitors had time to climb to the entrance. 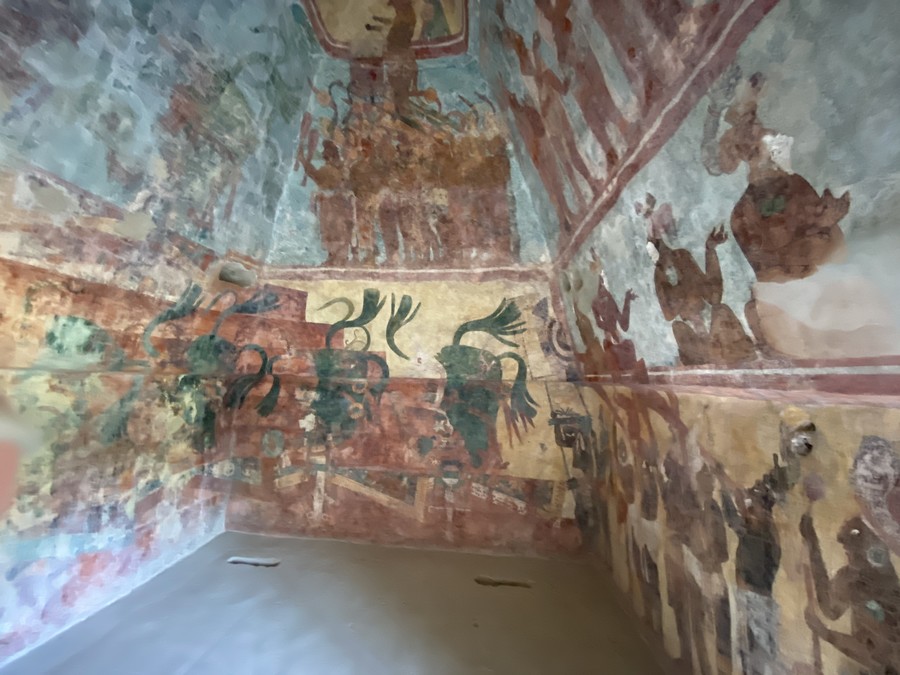 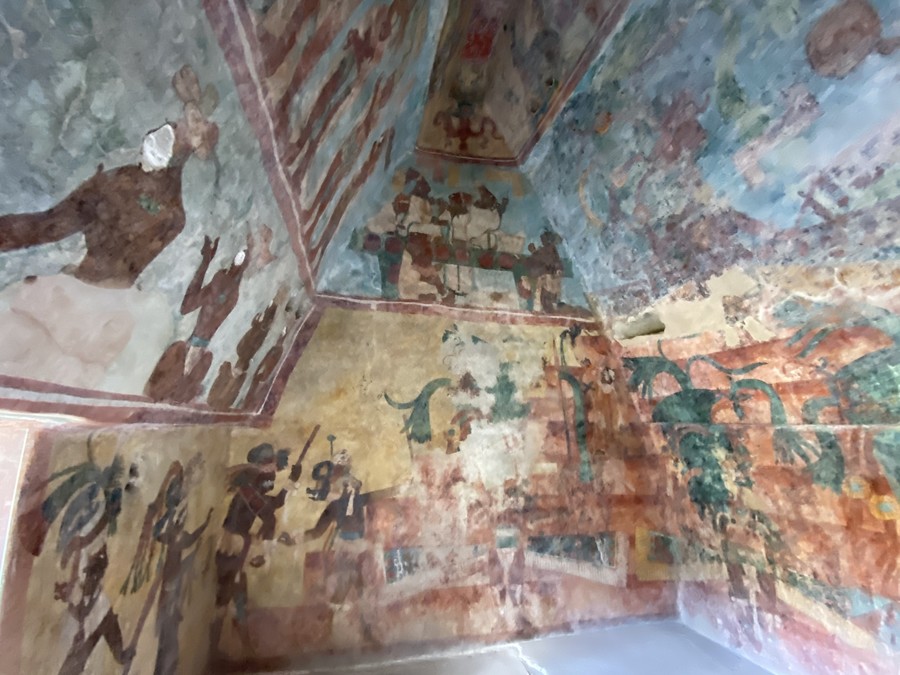 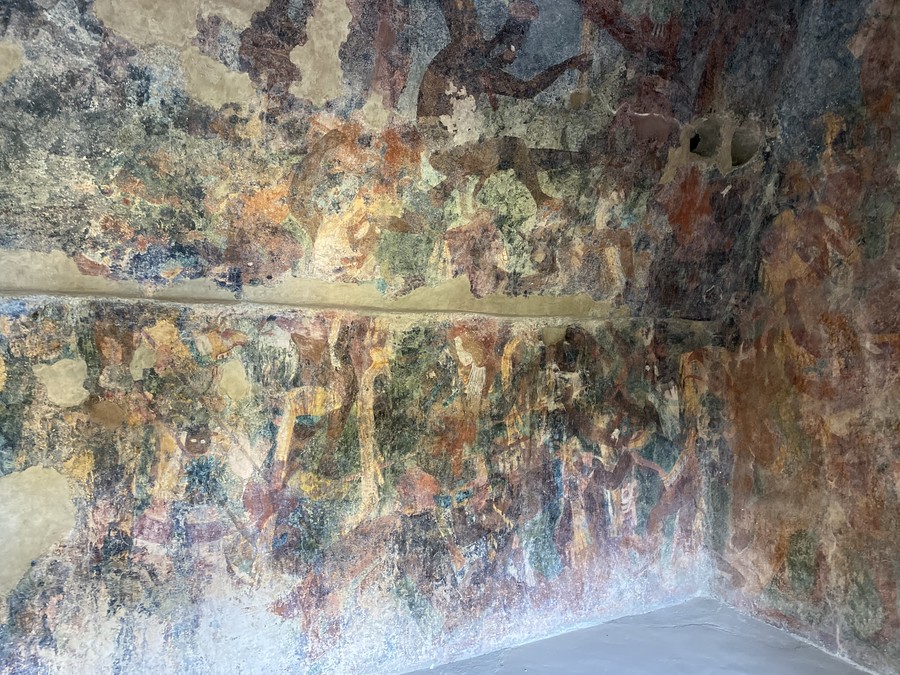 It is difficult now to see the content of the murals, but the brightness of the colors after more than a thousand years is striking.

In any event, my photos don’t do them justice and the murals have also deteriorated quite a bit over the last few decades. If you would like better pictures, see these.

The mural structure itself is now protected from the weather by a covering, which might allow carvings like this one above the doors to survive. 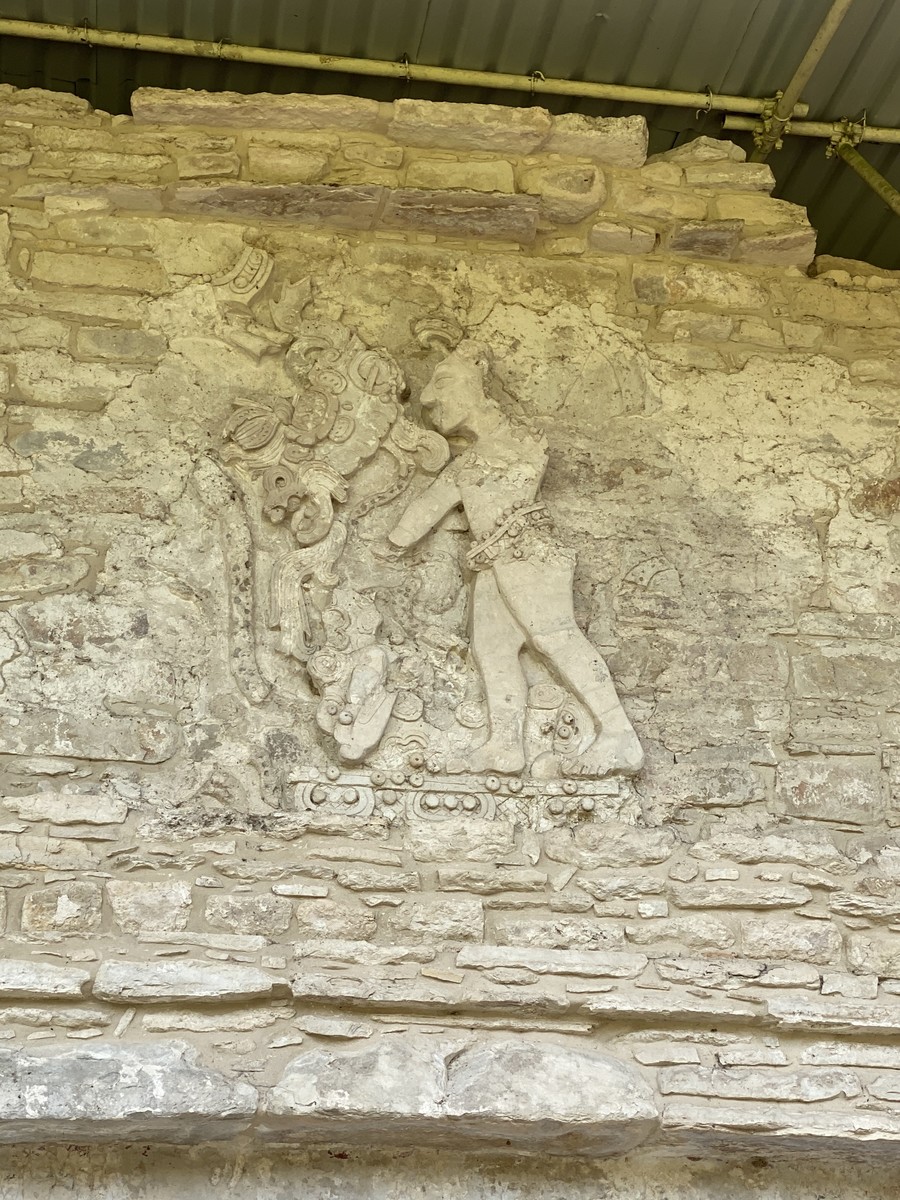 In addition to the murals, there are a few impressive stelae at the site, including this one of ruler Chan Muan II. 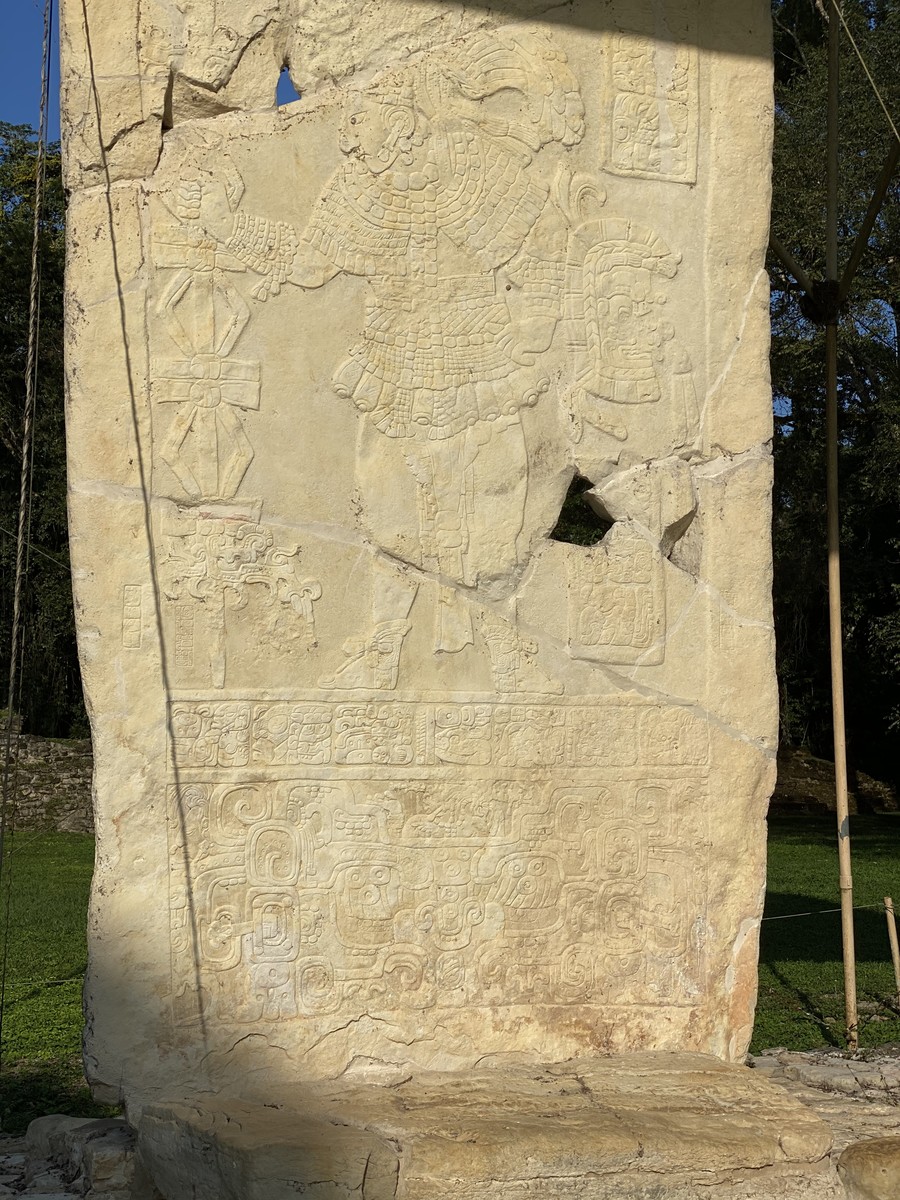 The view from the main structure, looking out over the Lancandon area is quite nice.

Leaving Bonampak, the van made a short stop nearby where I bid farewell to my international companions for the day. I was staying near Bonampak at a small compound of cabins. Everyone else in the van was returning to Palenque.

Overnight in the jungle

My jungle accomodation was basic, although I did have a private bath. Bare wood walls, a fan, and a bright pink mosquito net hanging over the bed were the extent of the features. 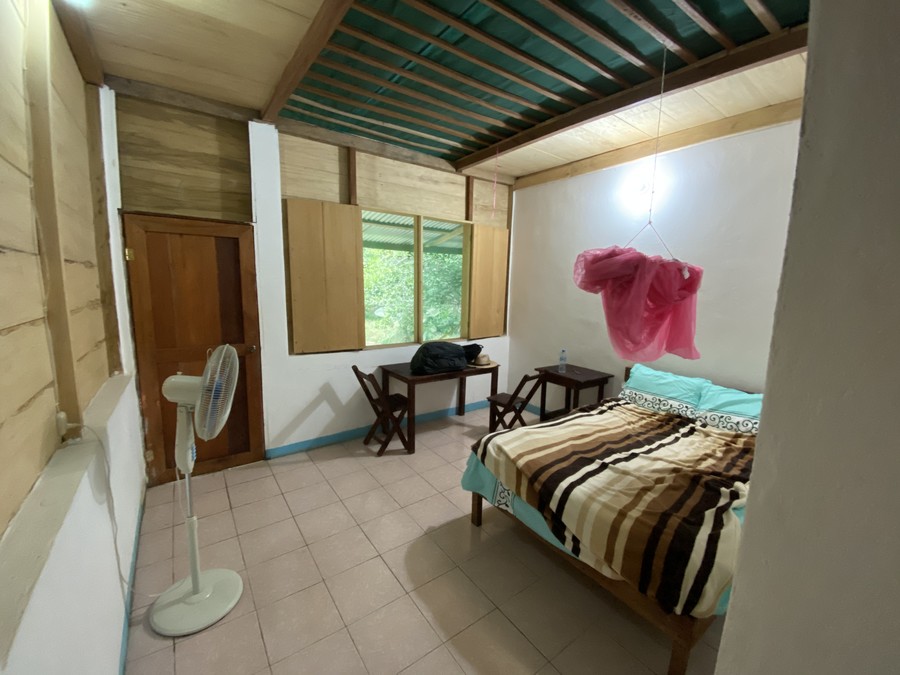 My building held three rooms, and with the ceiling area being open I could clearly hear my neighbor’s lengthy phone conversation in French. Fortunately, once he finished, it remained quiet until morning. 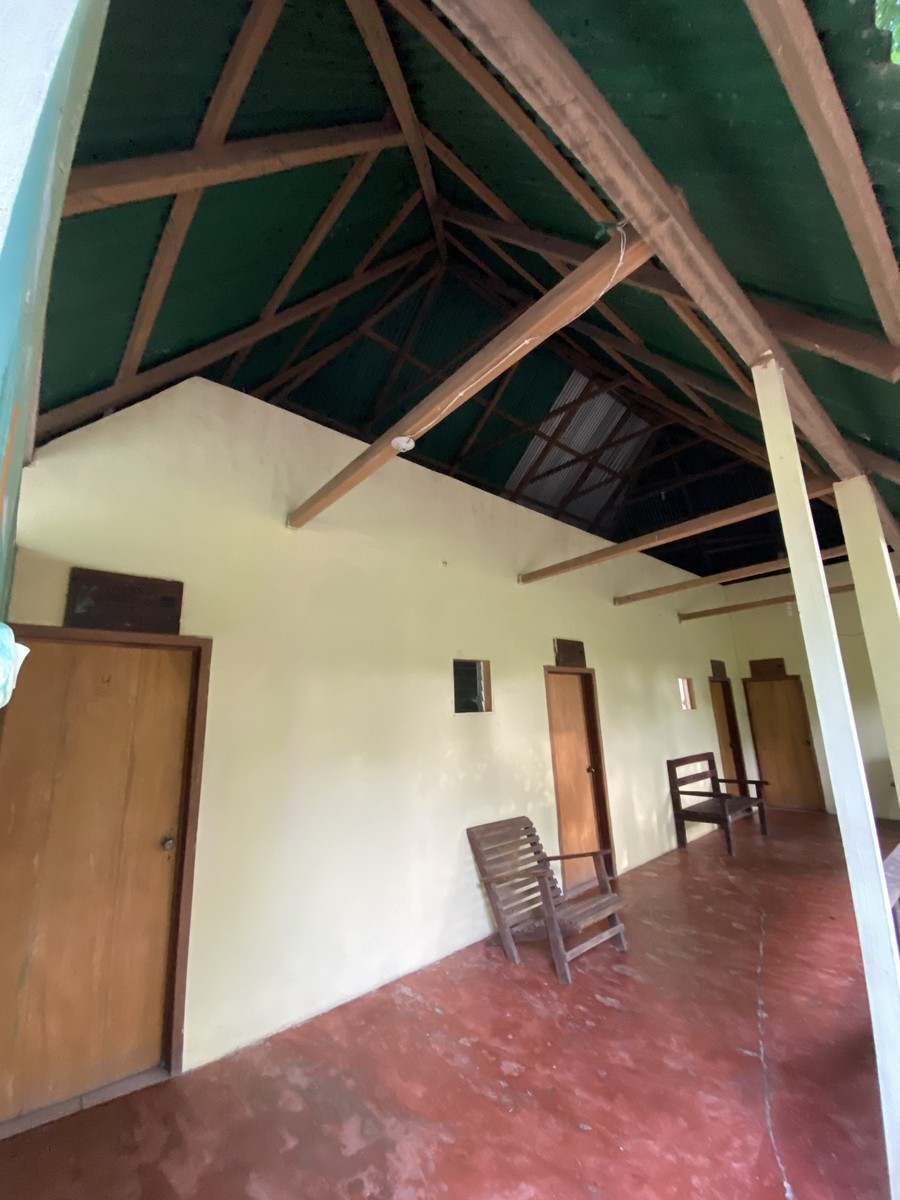 The other room in our building was occupied by a couple from New Zealand that I spoke to briefly. I hadn’t seen a single person from the United States since leaving Palenque the day before. Based on the absence of anyone else at dinner, I think we were the only three groups staying the night. 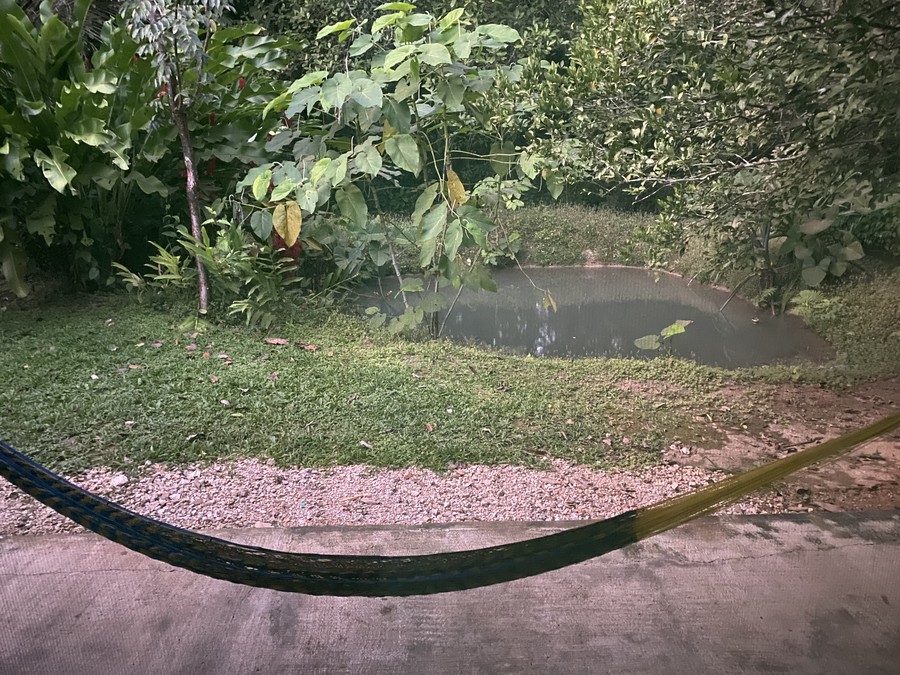 After venturing out on the back porch next to the hammock, I spotted a large hunting spider on my back wall. No, I didn’t take a picture.

But I did spray a good dose of my insect repellent in a line across the floor in front of the back door. The gap between the door and the floor was almost an inch. And so I was happy to unwrap the bright pink anti- spider net to protect me while I slept.

Although there was a water heater located just outside my cabin, closer examination the next morning revealed that it had long ago stopped providing hot water.

After a cold shower and a warm breakfast, I was driven by the owner back to the nearest highway junction to meet up with my same van from yesterday. 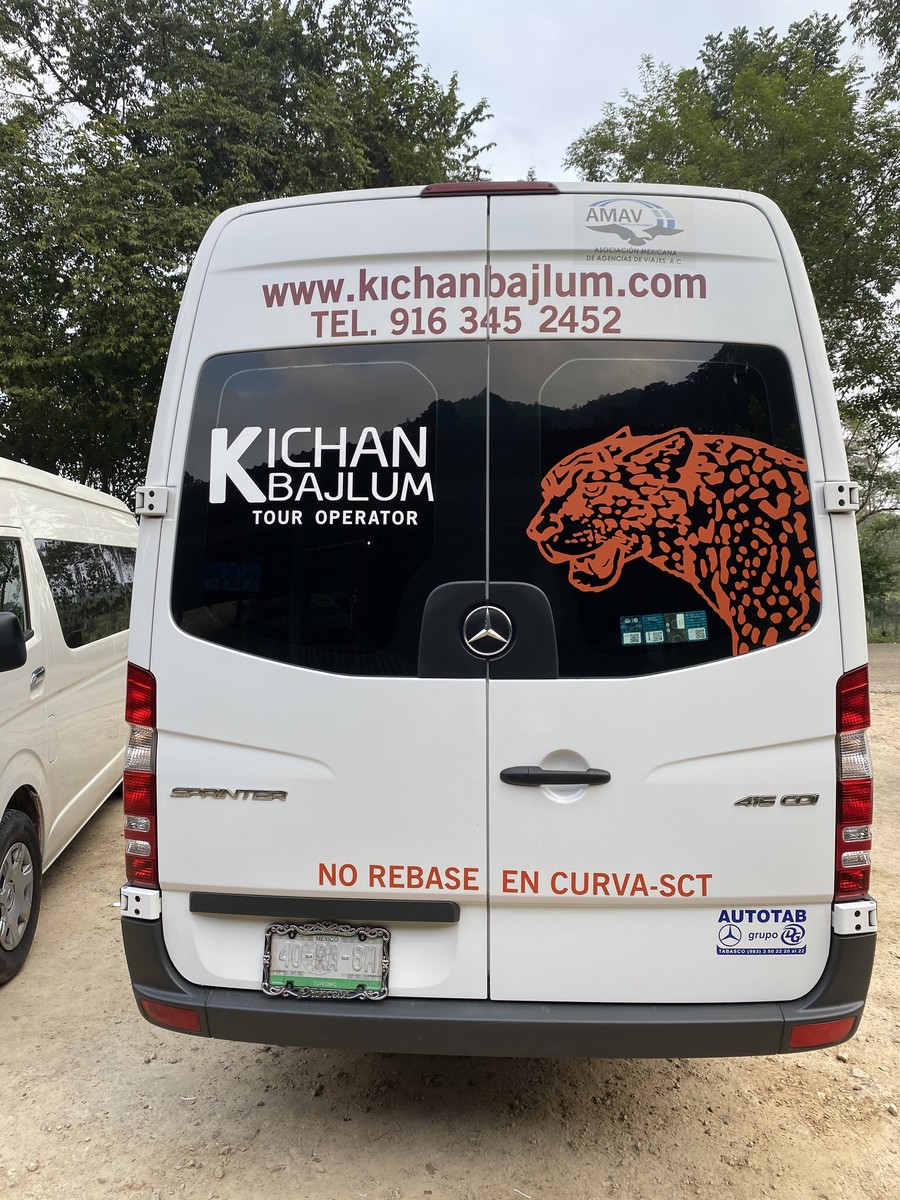 Today the van was filled with a whole new group of people making the trip to Yaxchilan and Bonampak.

I was only on board until Frontera Corozal. At the river, we boarded separate lanchas. Theirs headed to Yaxchilan, mine headed just across the river to La Técnica, Guatemala, from where I would continue onward. I’ll post about that adventure next time.

3 replies on “The Lancandon Jungle: Mayan sites of Yaxchilan and Bonampak”

What an amazing journey of discovery you had from place to place. You truly had energy to keep on to all these excursions.

Mexico, Guatemala, and Honduras are beautiful. Keep on traveling

If you speak Spanish, here’s an outstanding documentary about Yaxchilan on YouTube: