One site on my itinerary was largely responsible for inspiring the entire journey: Tikal. This Mayan site in the Guatemalan jungle has long been on my list, and I was excited to finally be making it happen.

Getting from Flores to Tikal is pretty easy. Most visitors book a tourist shuttle that picks them up from their hotel for the hour and a half drive. However, the company that runs most of the shuttles has a somewhat questionable reputation. Although the Tikal shuttles seem fine, some of the other services provided by the same company are often the source of complaints about overpricing and bait and switch tactics.

I chose instead to use public transportation, which was always more fun anyway. After a $1.30 tuk-tuk ride to the bus station in Santa Elena, I bought a $9.20 round trip ticket for the local colectivo. In a matter of minutes I was aboard and headed toward Tikal. The ride made a few extra stops of course, but those added only about 15 minutes to the journey. 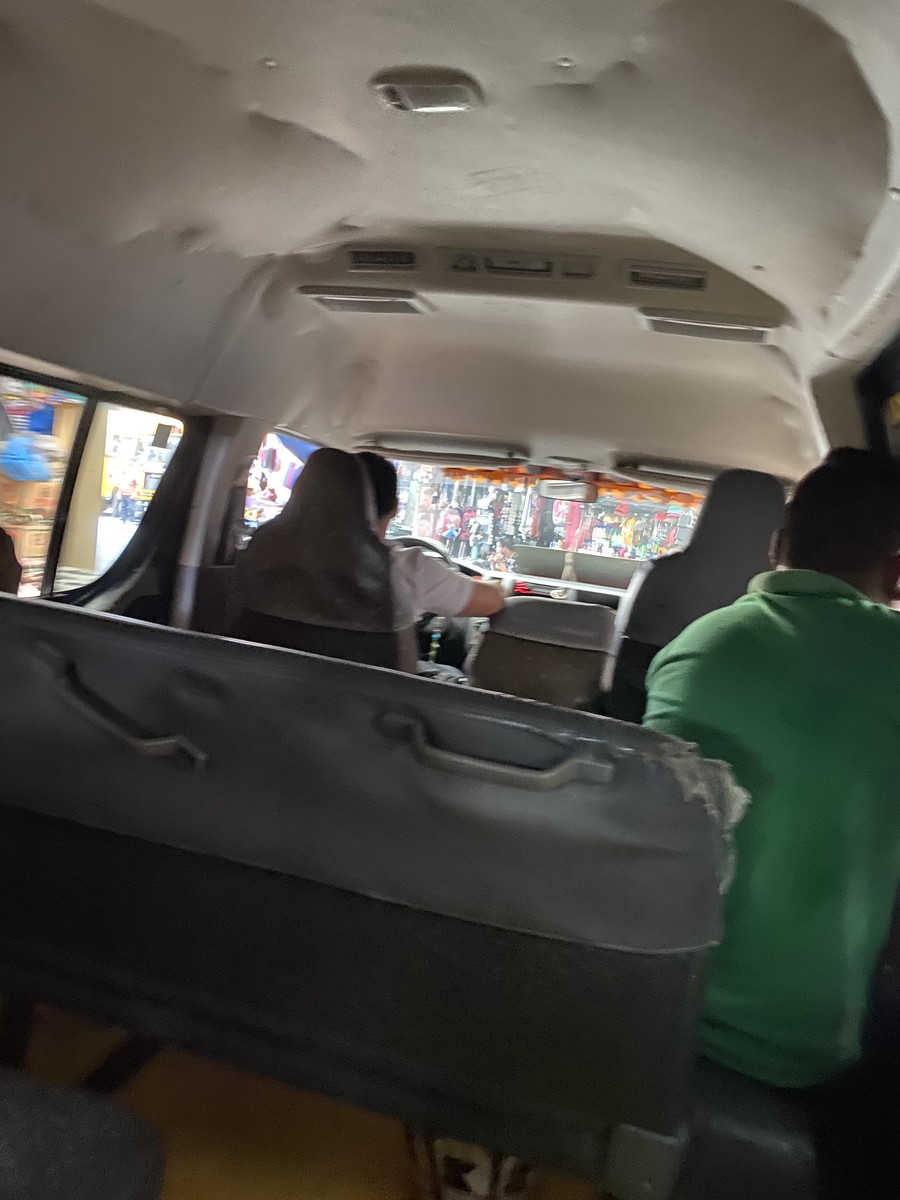 In the crowded van, I met a musician Daniel and his friend Tony, both from Colorado. Daniel’s reason for heading to Tikal was particularly touching.

His mother had passed away unexpectedly only a few months after she too had visited Tikal. Remembering her descriptions of the magic of the site, Daniel had been compelled to retrace her path. He brought her ashes to leave at the site that she had so enjoyed.

I had low expectations for my stay at the Jungle Lodge inside the national park of Tikal, despite it being the most expensive room night of the trip at $103 USD. Having read about the limited hours of electricity and lack of air conditioning mandated by the national park, I expected a somewhat rustic stay.

Boy, was I wrong! This place was amazing! 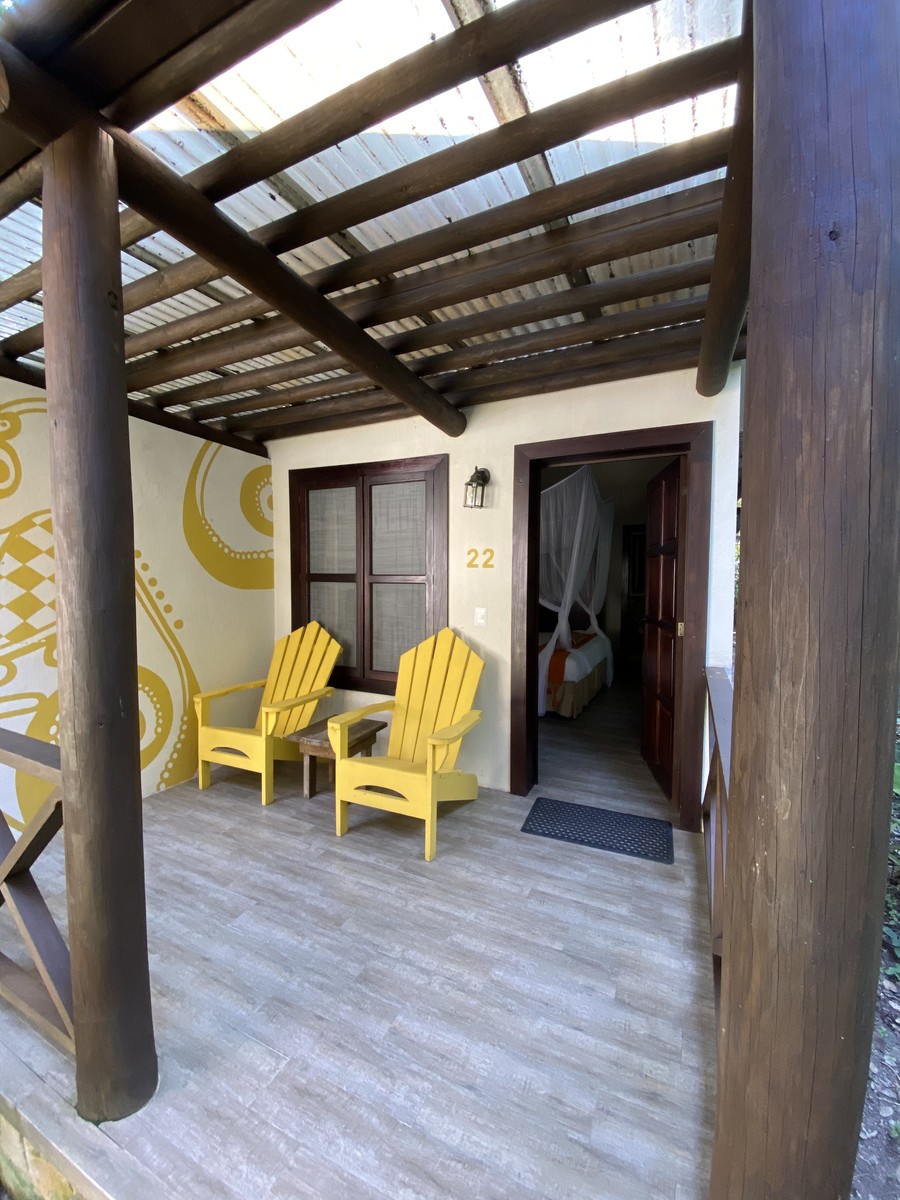 In addition to a very comfortable room, the facilities here were outstanding.

In the restaurant, I joined Daniel and Tony along with a new friend Dianne, an intrepid traveler from Ontario Canada who has never met a stranger. After dinner and a quick game of pool, the four of us watched a Tikal documentary presented in the hotel meeting area.

Heading to my room afterwards, I apparently missed a fun night with Daniel performing on guitar. The following day Dianne recorded one of his songs.

I set my phone alarm for 3:45 AM. My sunrise tour was meeting at the lodge at 4 o’clock.

However, enjoying the sounds of the jungle through my screened windows, I couldn’t get to sleep. I was still awake at 11 when the electricity switched off for the night. Outside, the small lights which illuminated the paths of the resort disappeared and I was left in complete and utter darkness. I was asleep soon thereafter.

Even with the volume turned down low, my morning alarm sounded like a fire truck siren in the darkness, and the phone screen lit up the room with a blinding glare.

Soon I was walking along the path toward the lodge, using my small flashlight to guide the way. A few monkeys gave me just a small taste of what was to come.

There were five of us in the sunrise tour, plus an English-speaking guide. From the entrance, we walked in the darkness for nearly half an hour to reach Temple IV, on the western edge of the ruins. We made an occasional stop to examine carvings, actually more easily seen in darkness than in sunlight, using a flashlight shined across the face. 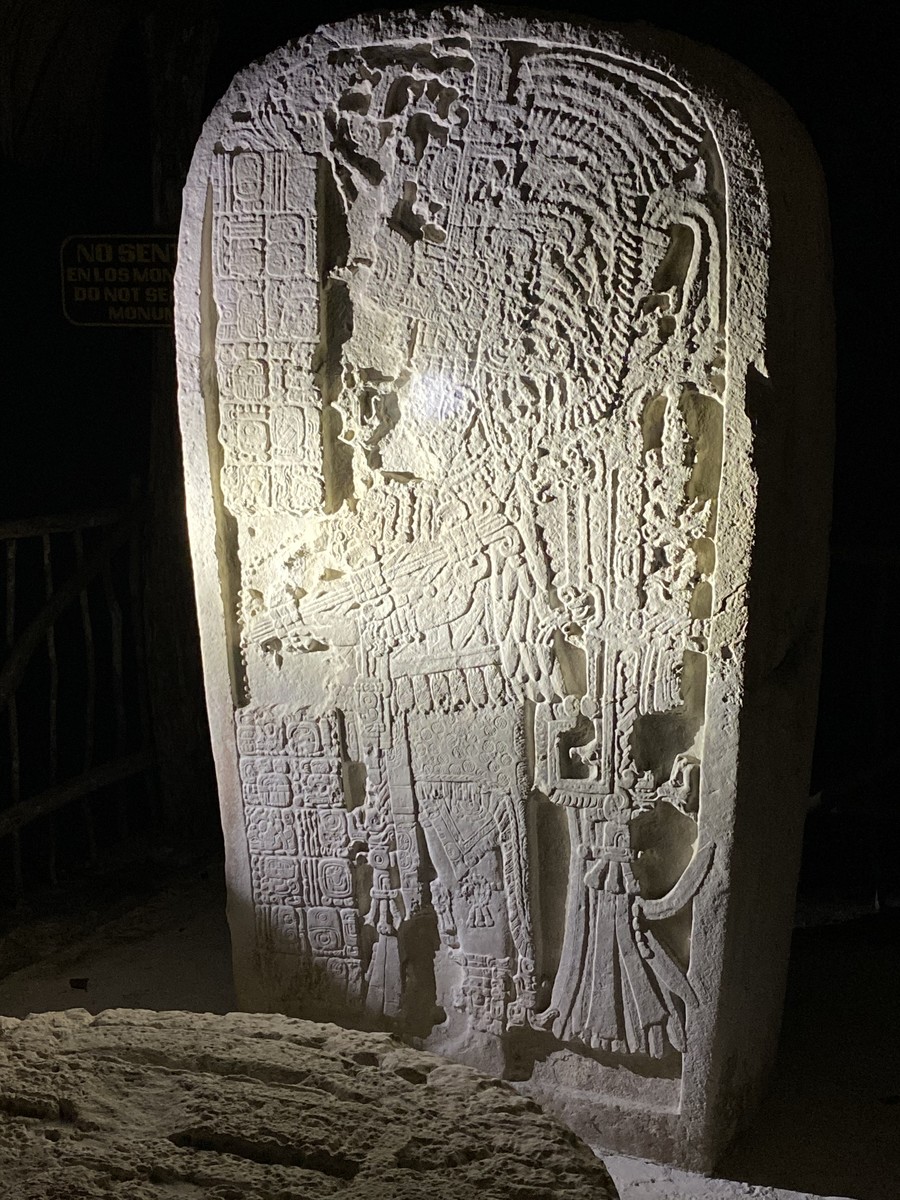 At Temple IV, we ascended a wooden staircase and joined a small but growing group of travelers perched atop the stone pyramid in the pre-dawn chill.

The next 20 minutes are the most memorable of all my experiences on this trip. Imagine yourself sitting on the stone steps of the pyramid in complete darkness, listening to the jungle coming to life around you…

This was truly an unforgettable experience.

By contrast, the sunrise itself was completely forgettable. As happens often here, a dense fog had formed over the forest before dawn. From high atop the pyramid, it completely obscured the view across the site. 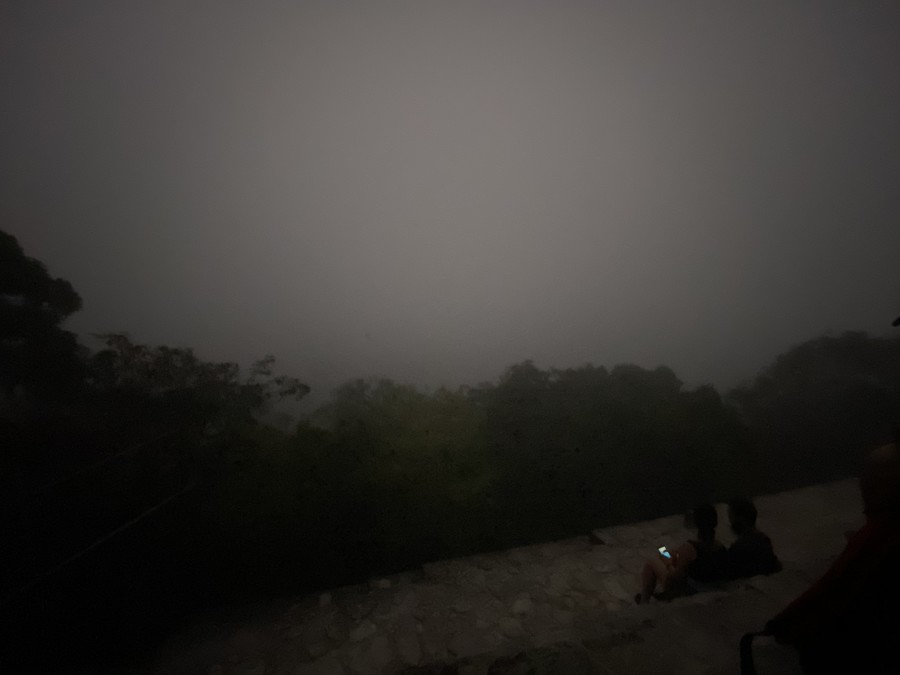 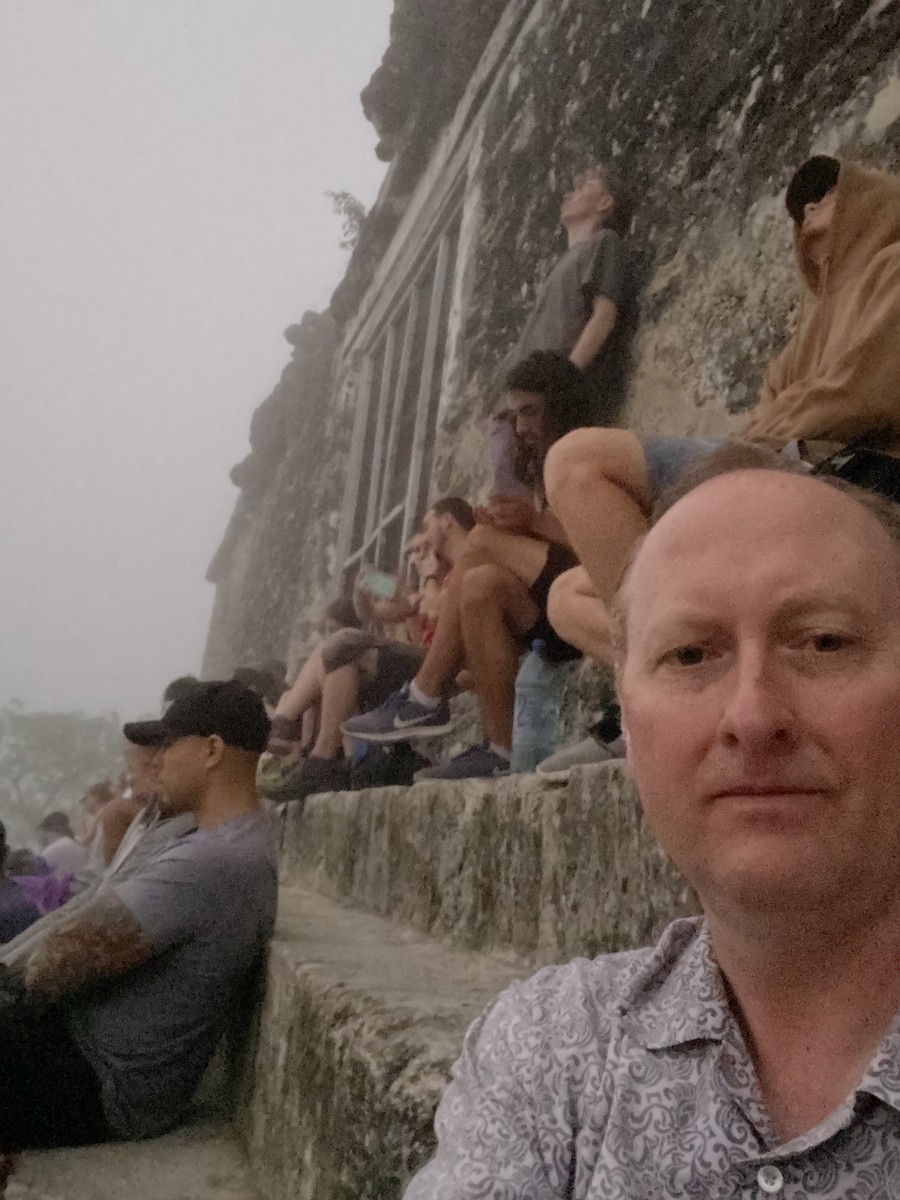 I would have to return here later in the day to get photos of the view.

Even with the sun up, the fog took an hour or more to burn off. But it didn’t keep me from exploring the site.

In fact, the drifting fog added to the surreal nature of the place as temples and palaces appeared and disappeared in the mist. As Daniel’s mother had described to him, this was a truly magical place. 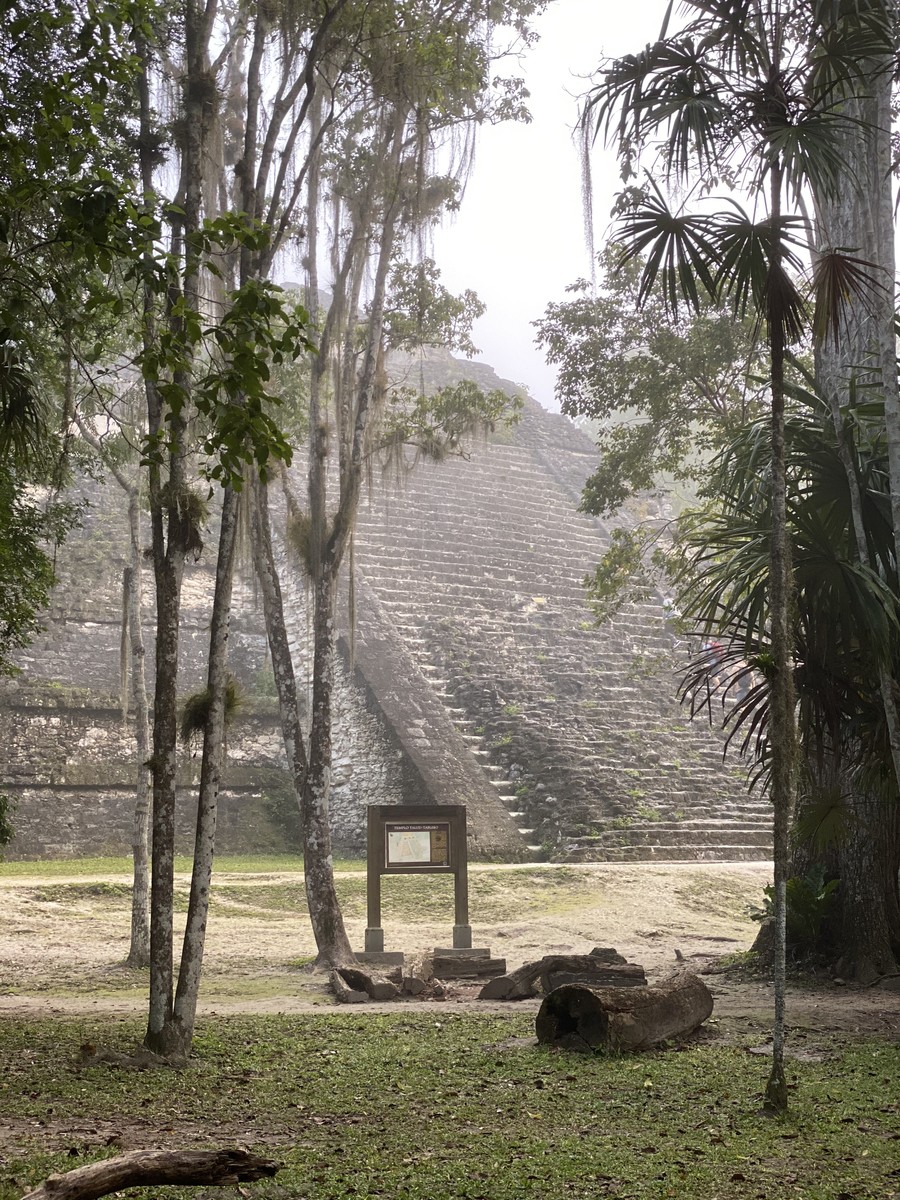 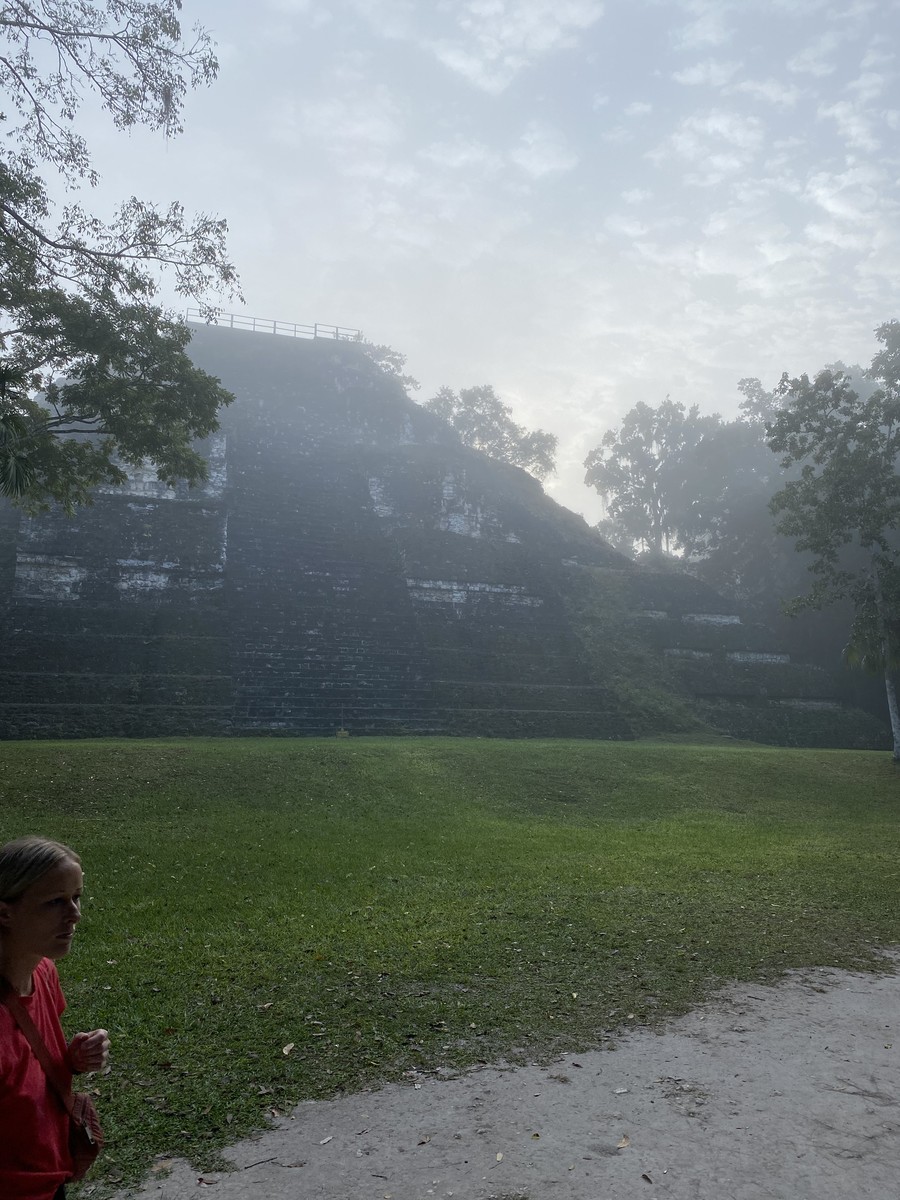 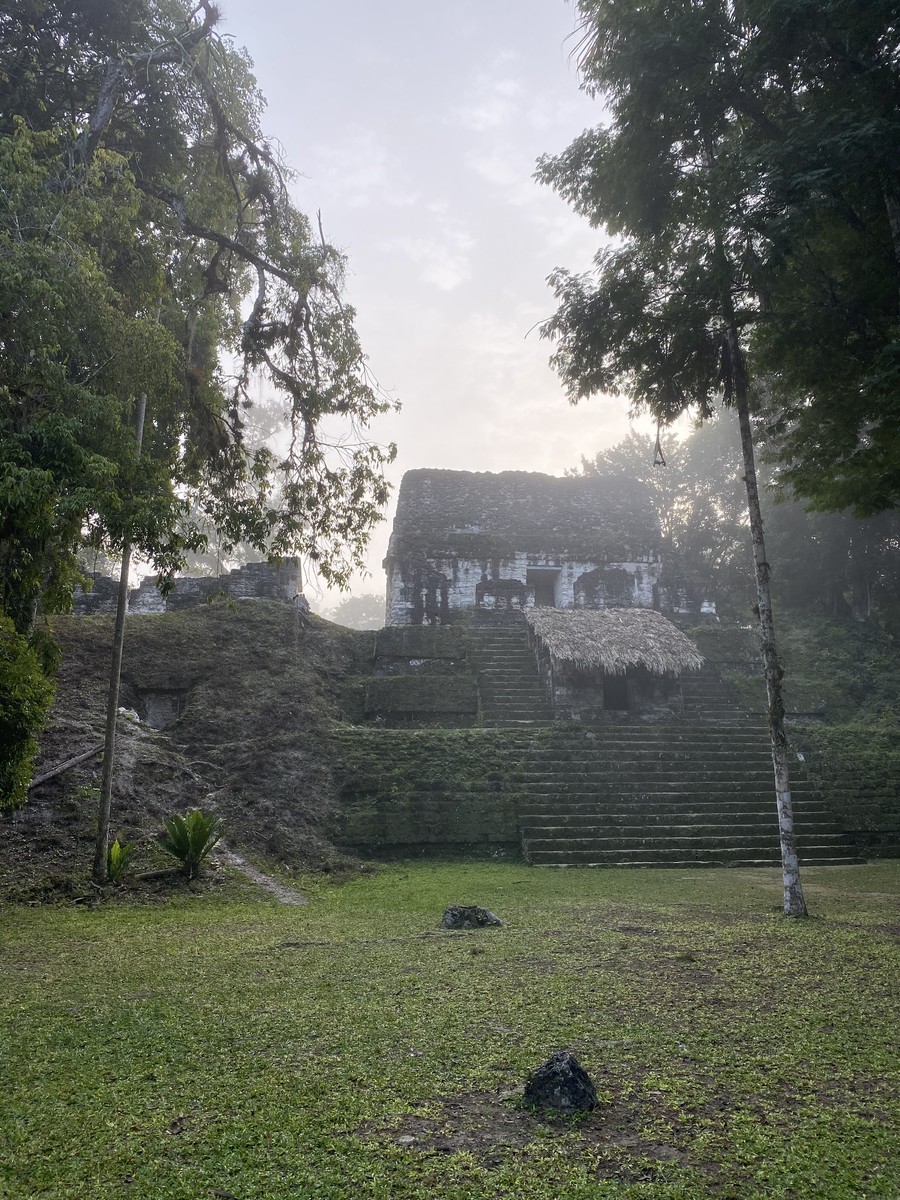 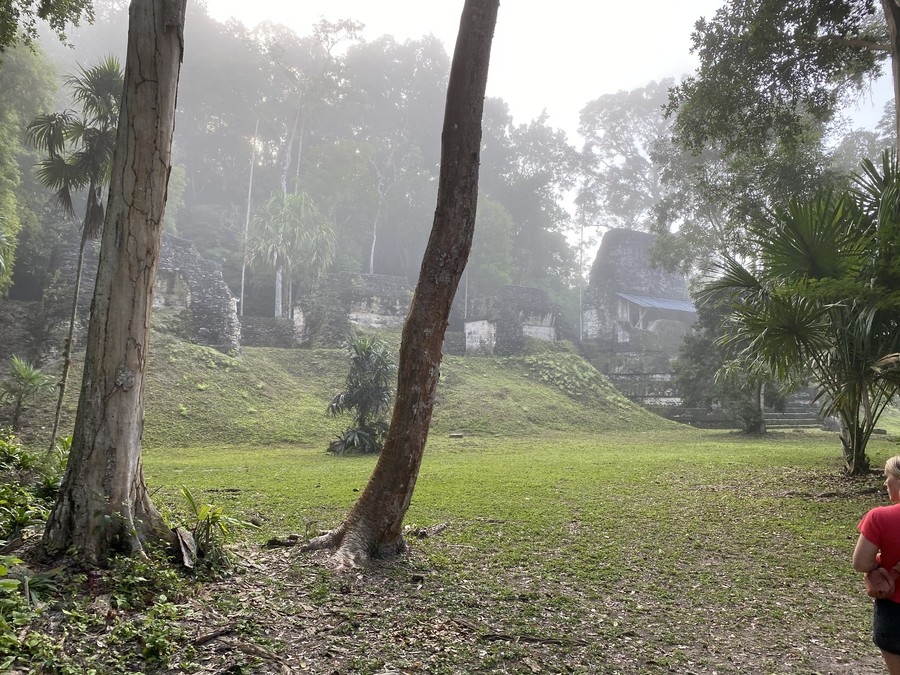 Tikal is a massive site, easily the largest of the Mayan sites I have visited. By the end of my visit, I had walked more than six miles, and climbed countless steps. 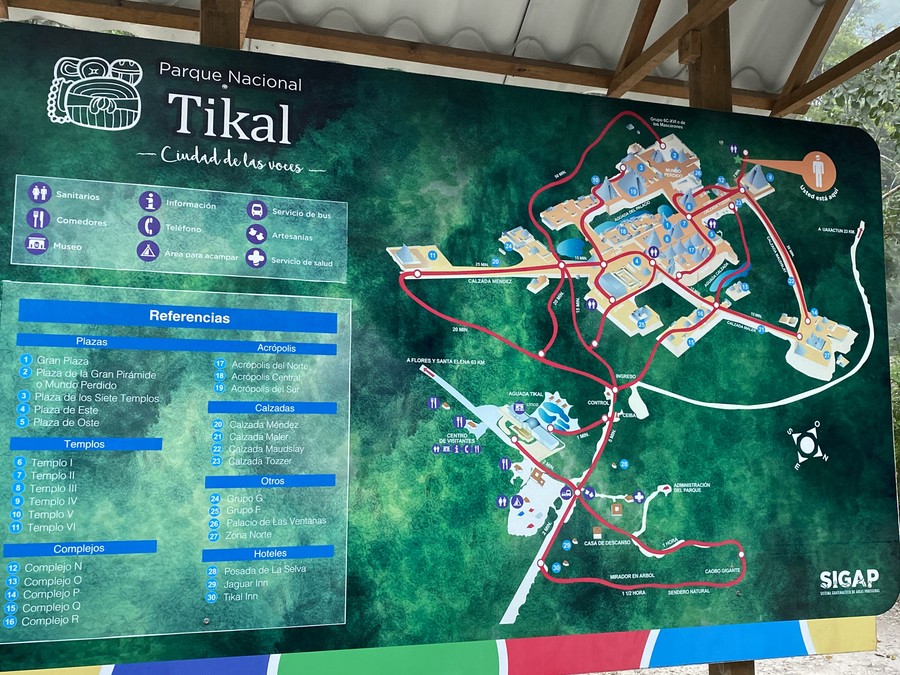 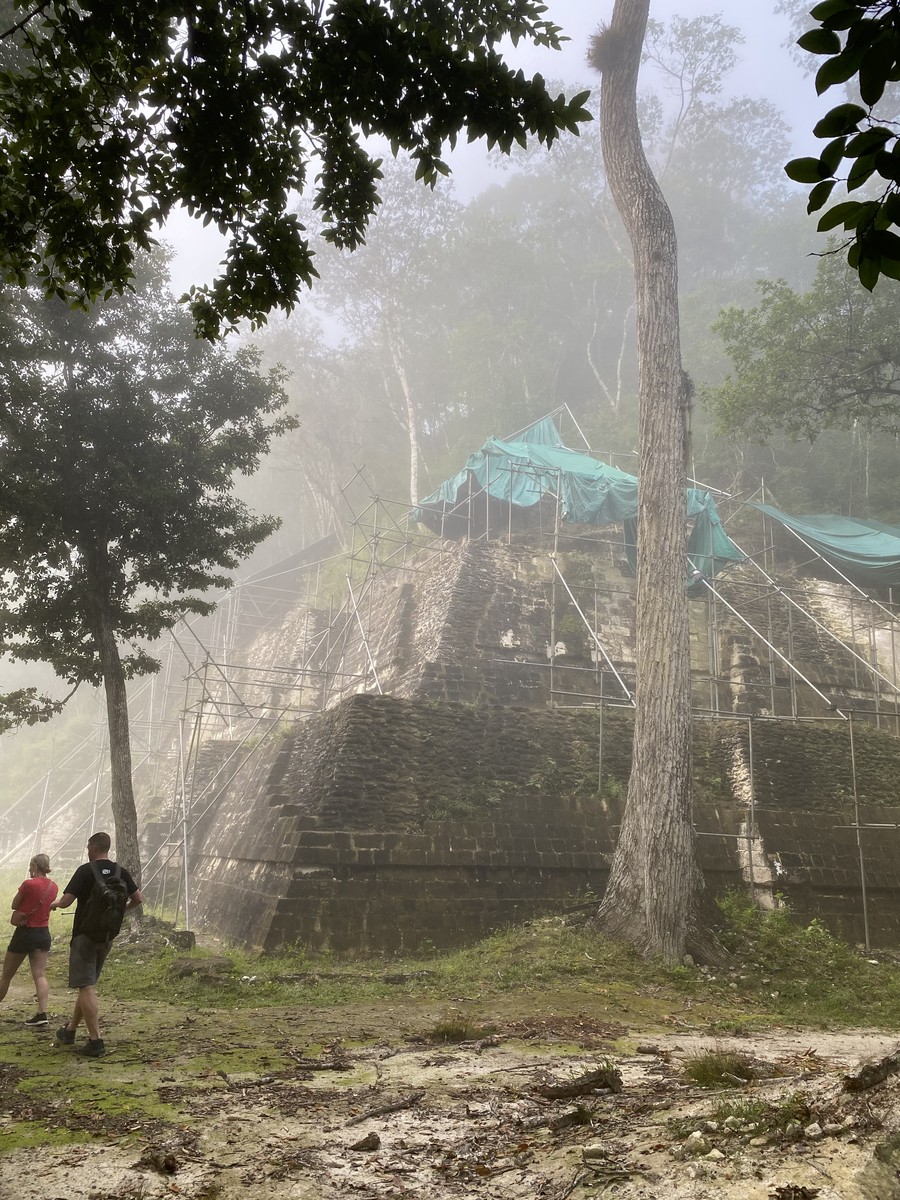 When I stopped to eat a snack from my pack, a coatimundi wandered up hoping for a free meal. I didn’t oblige. 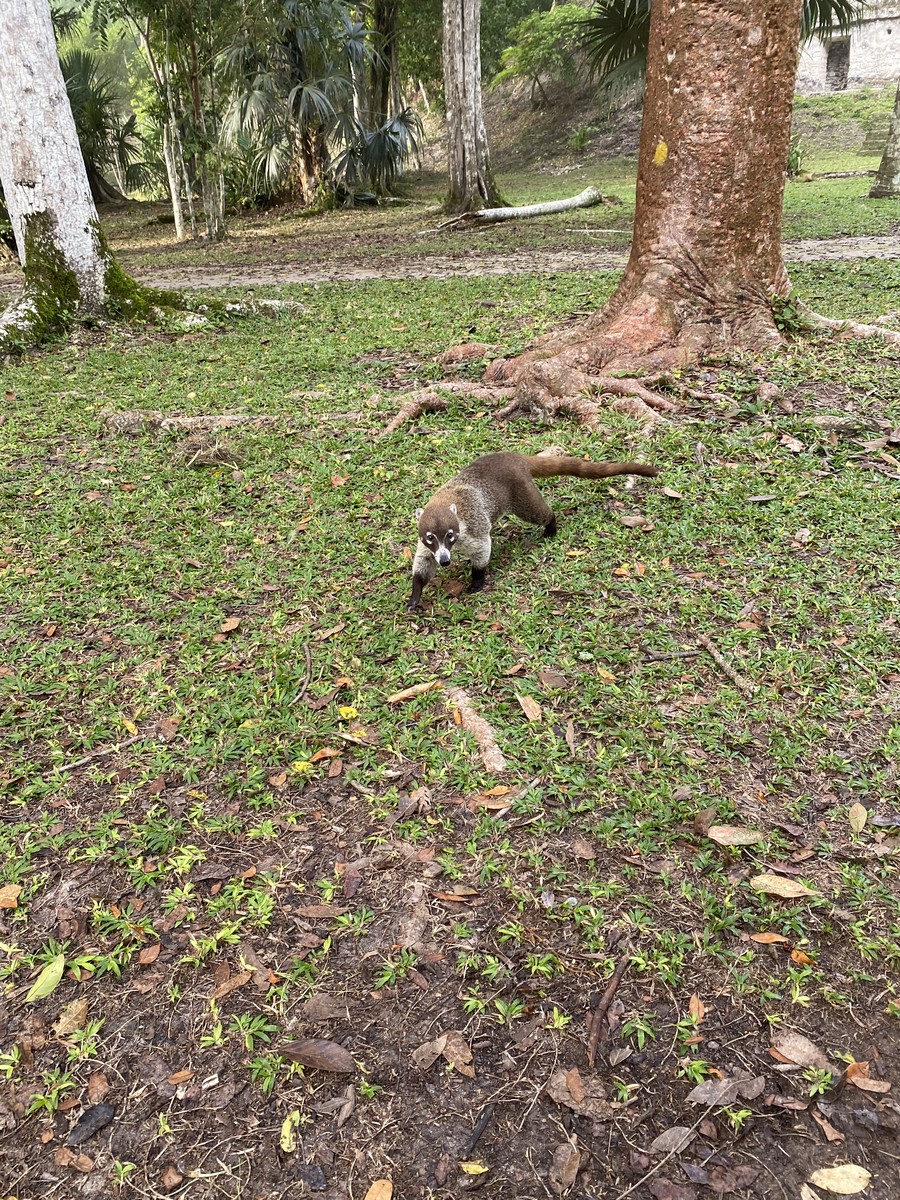 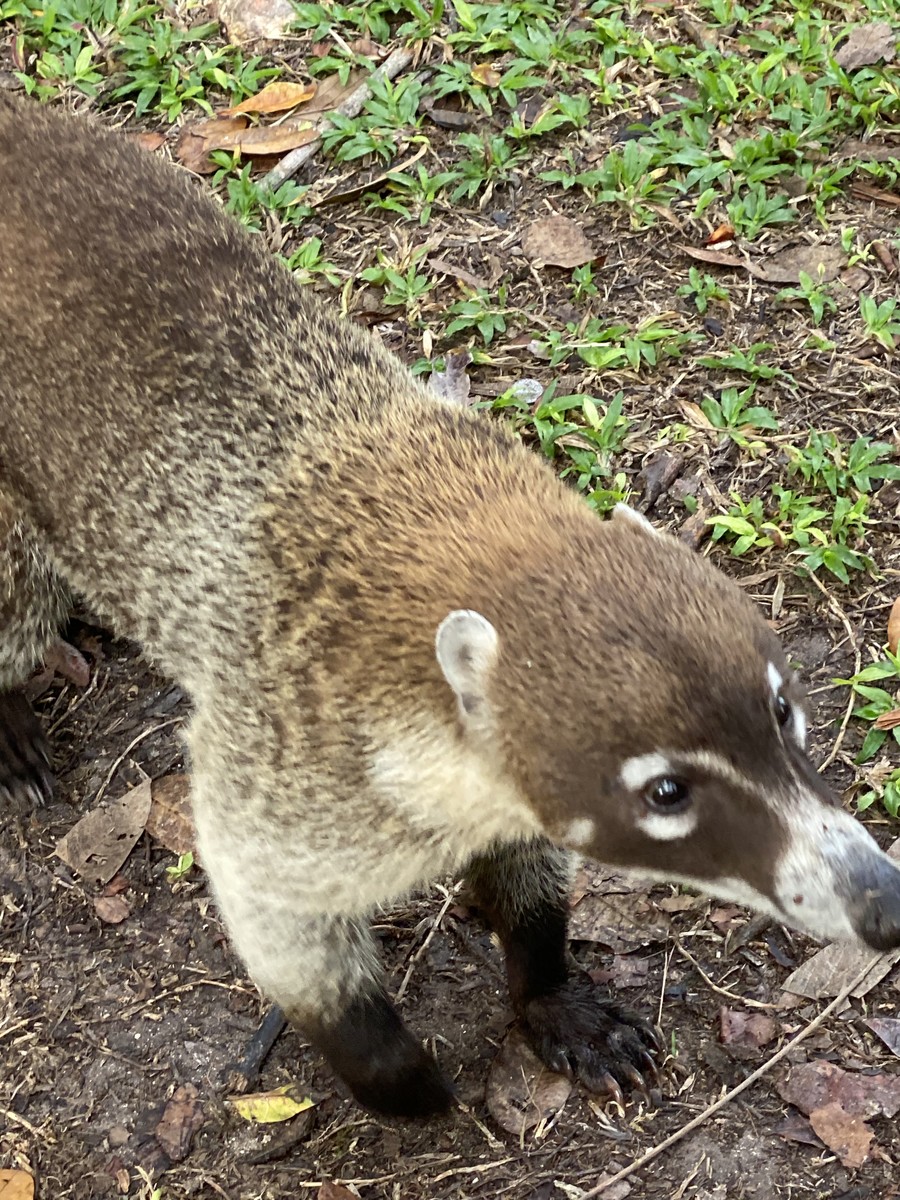 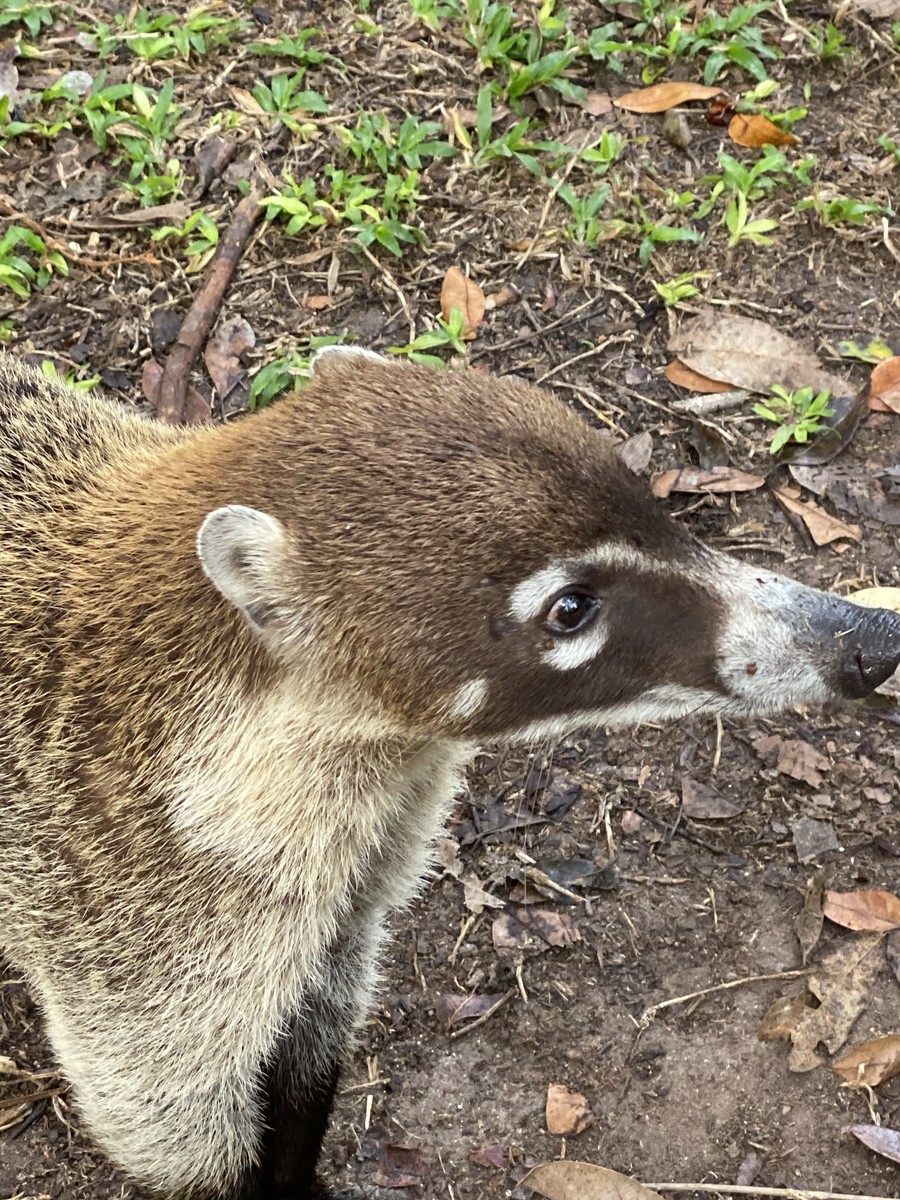 The trails wind through the jungle, each time emerging in a plaza seemingly larger than the last. 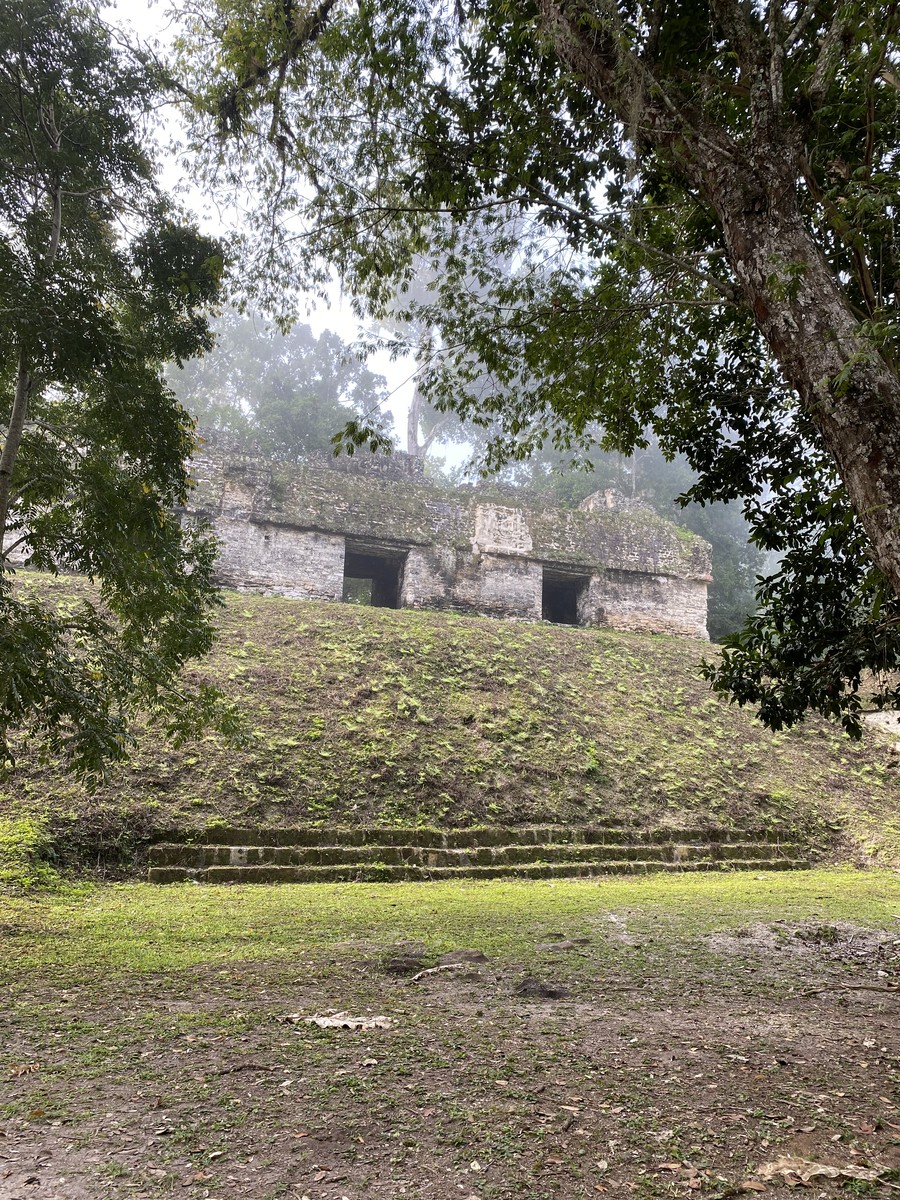 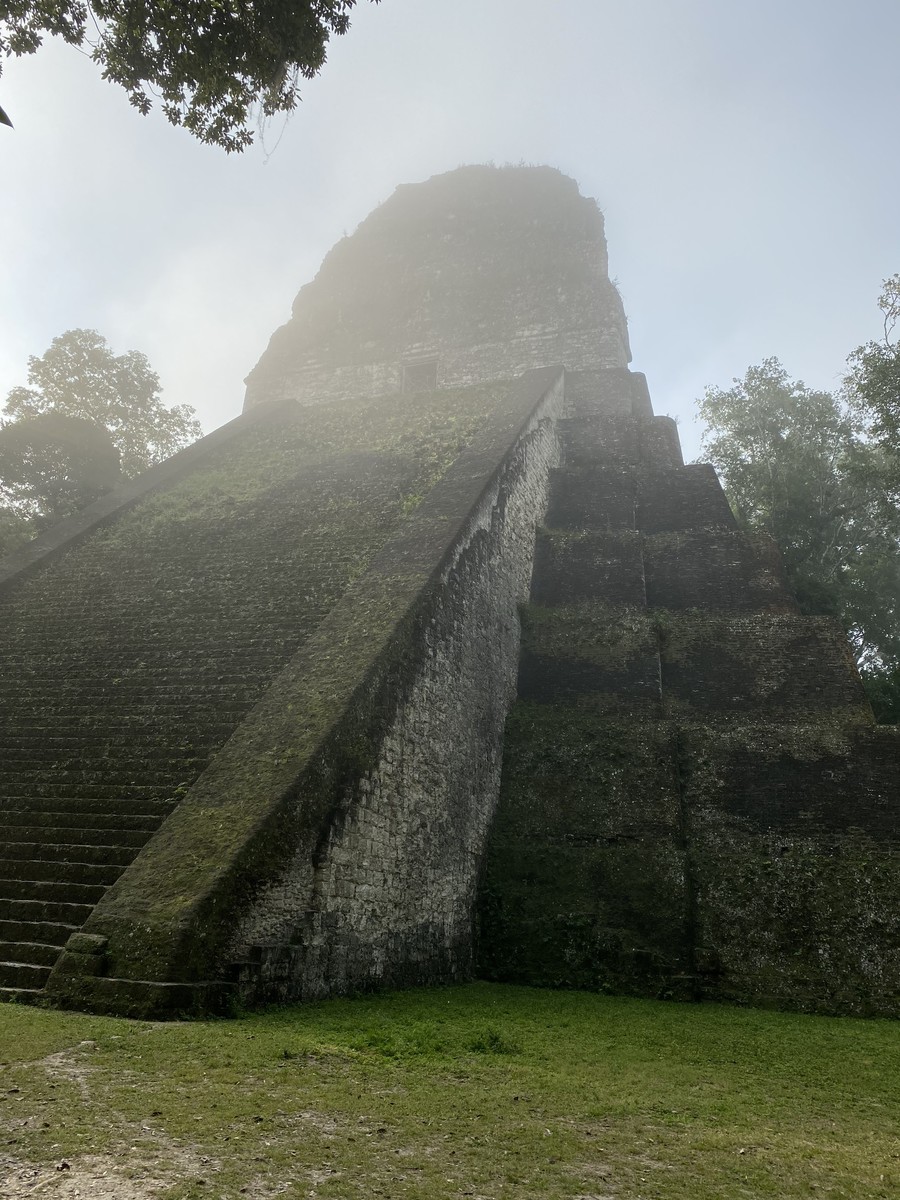 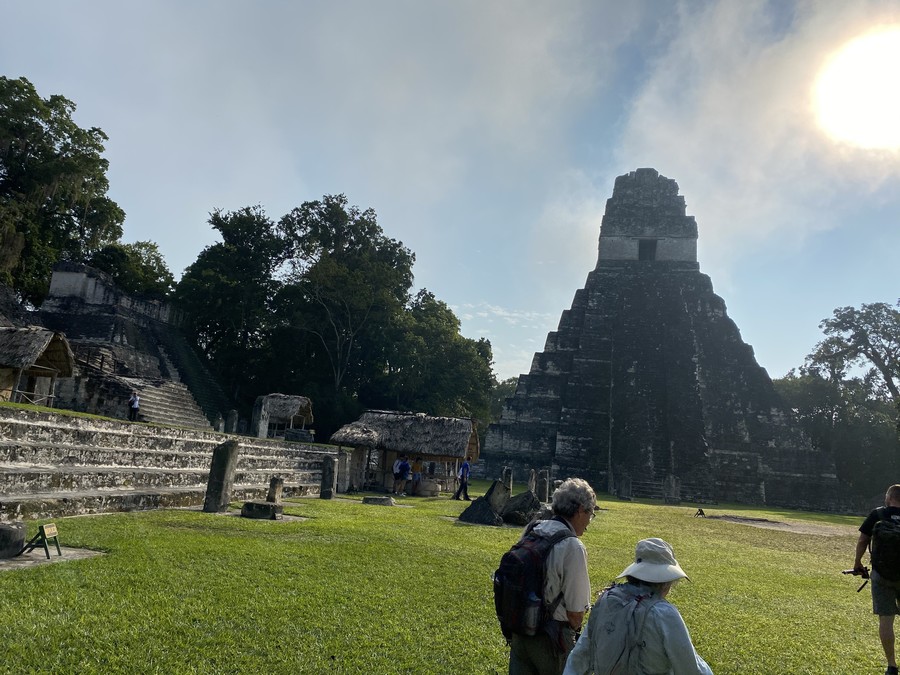 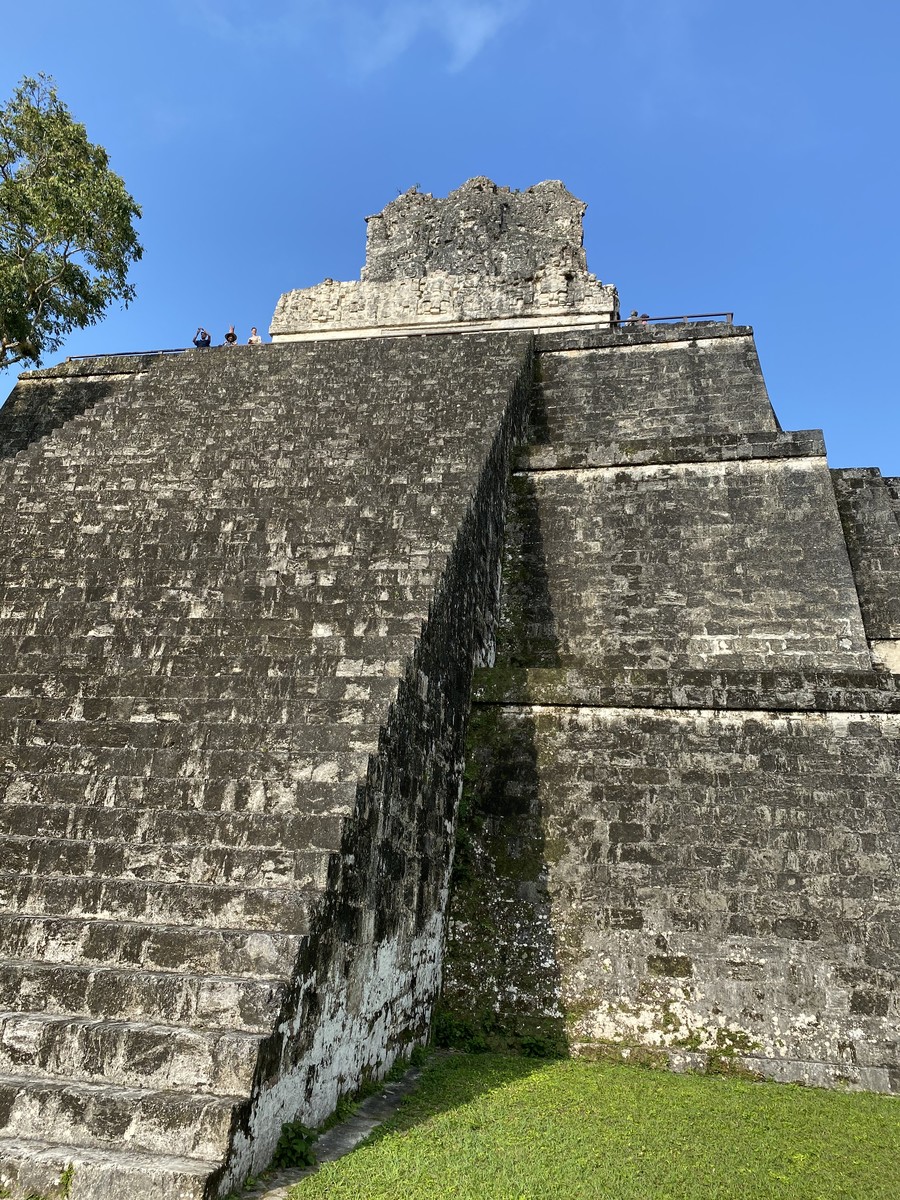 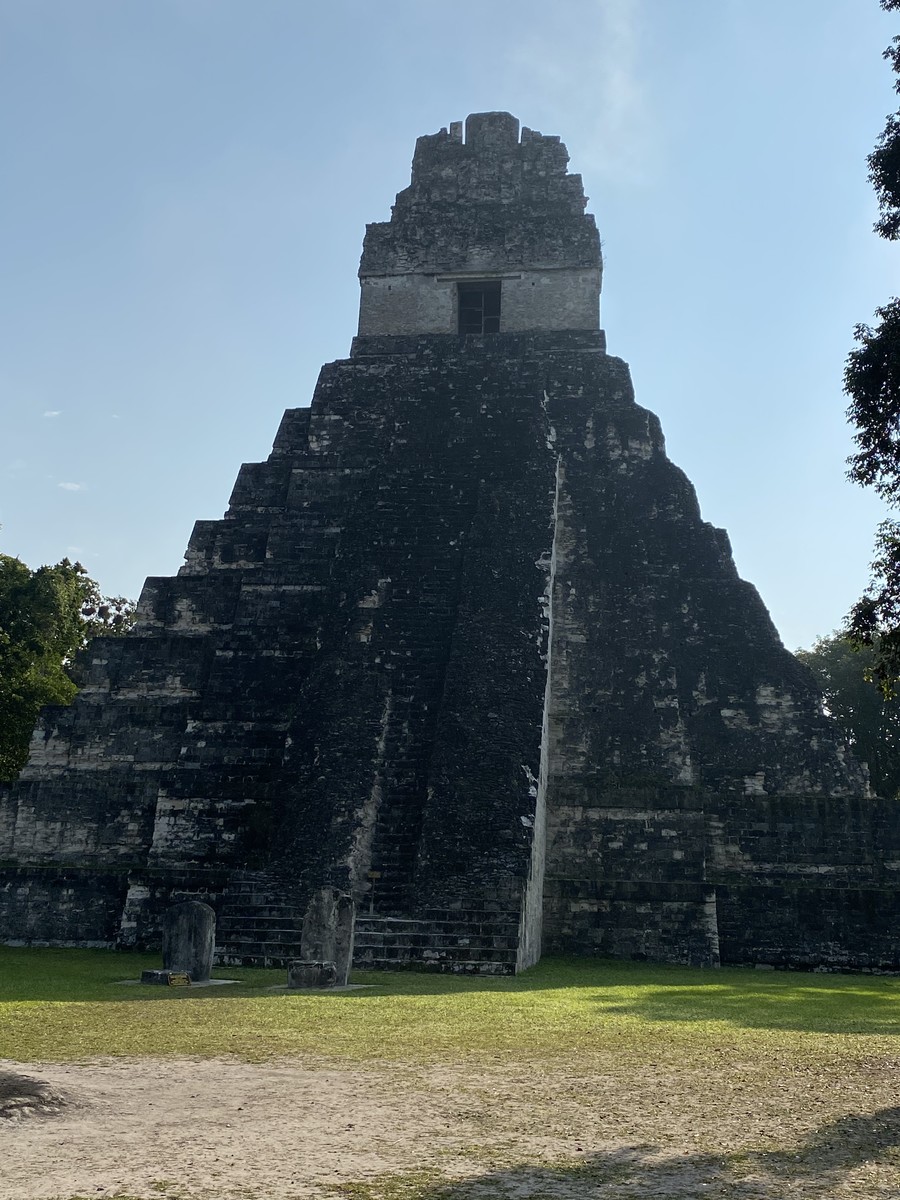 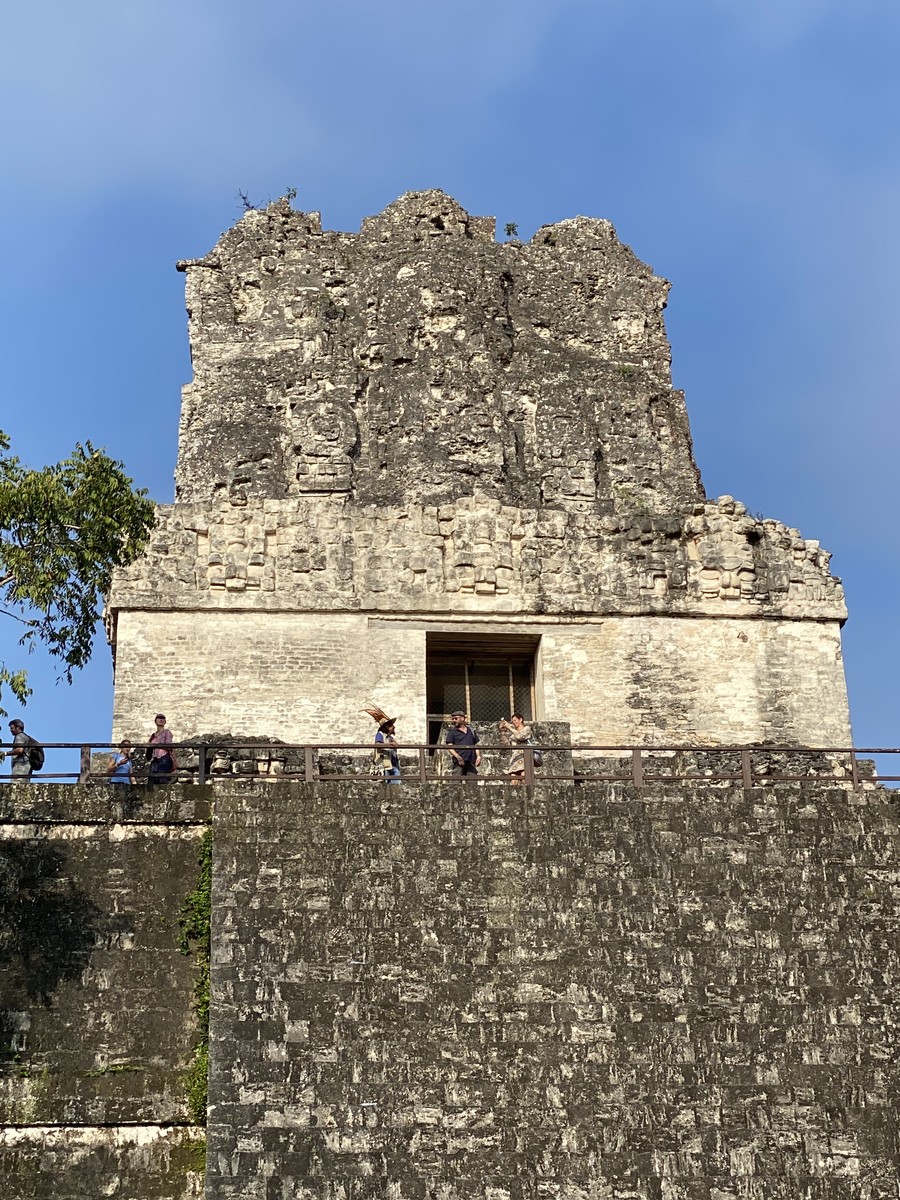 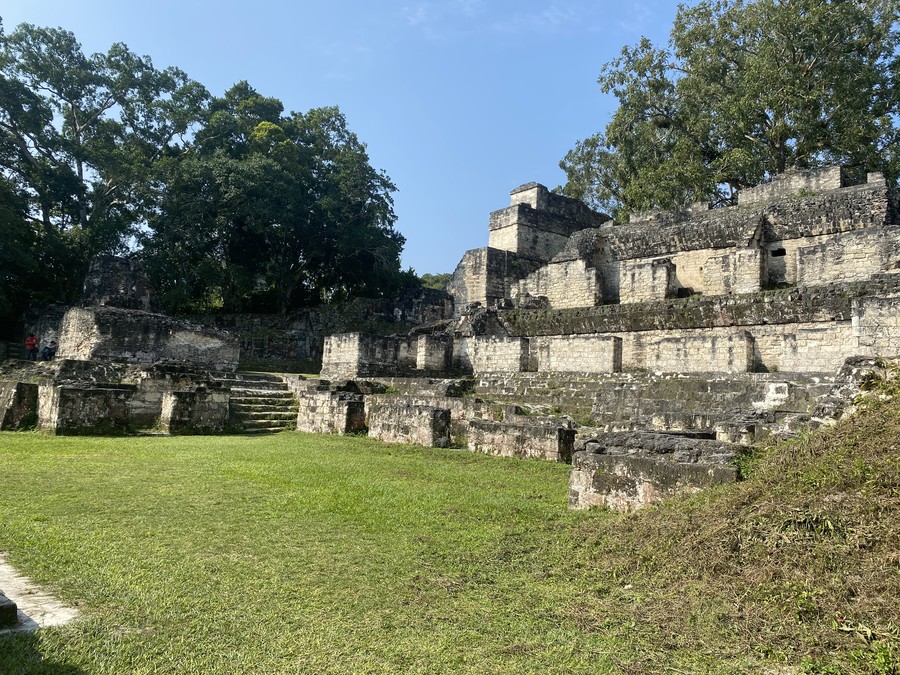 There were several areas with extensive carvings and stelae. 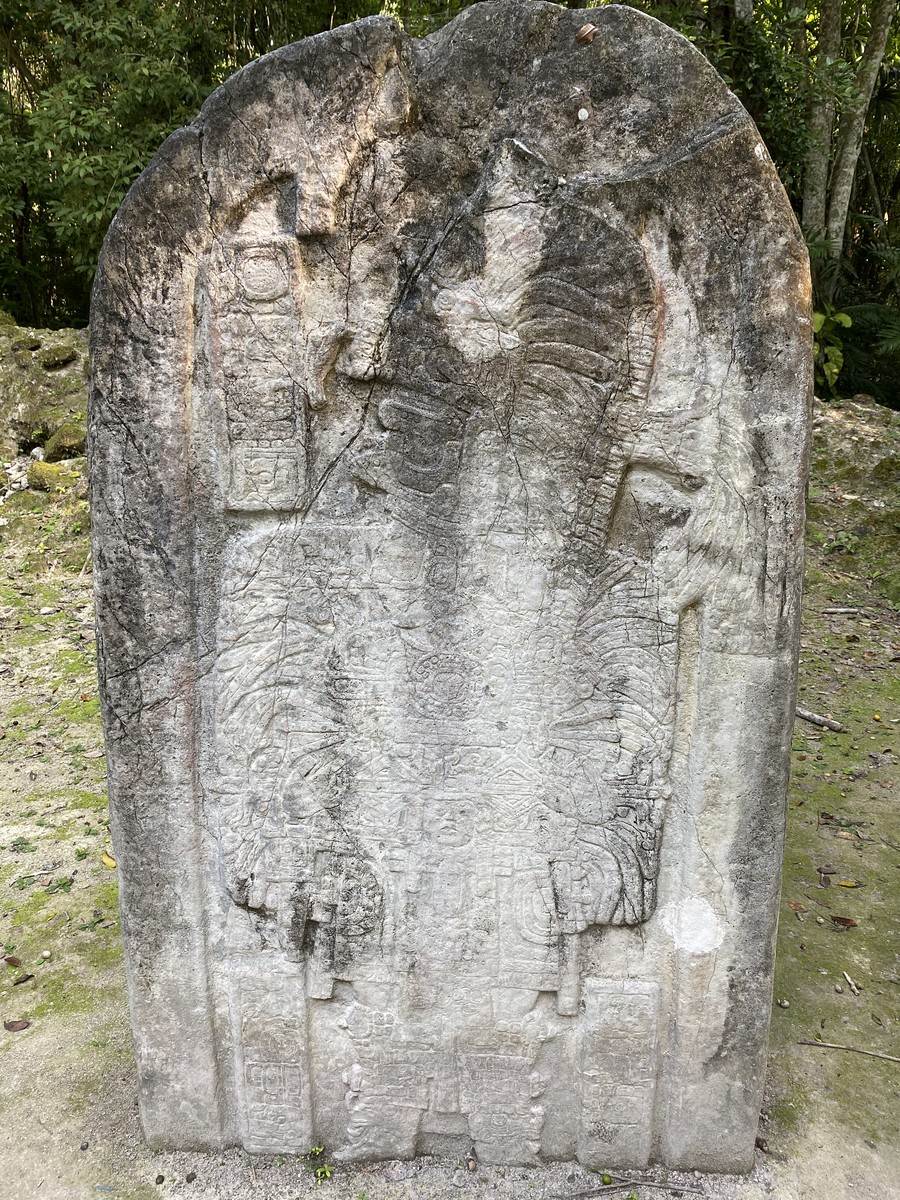 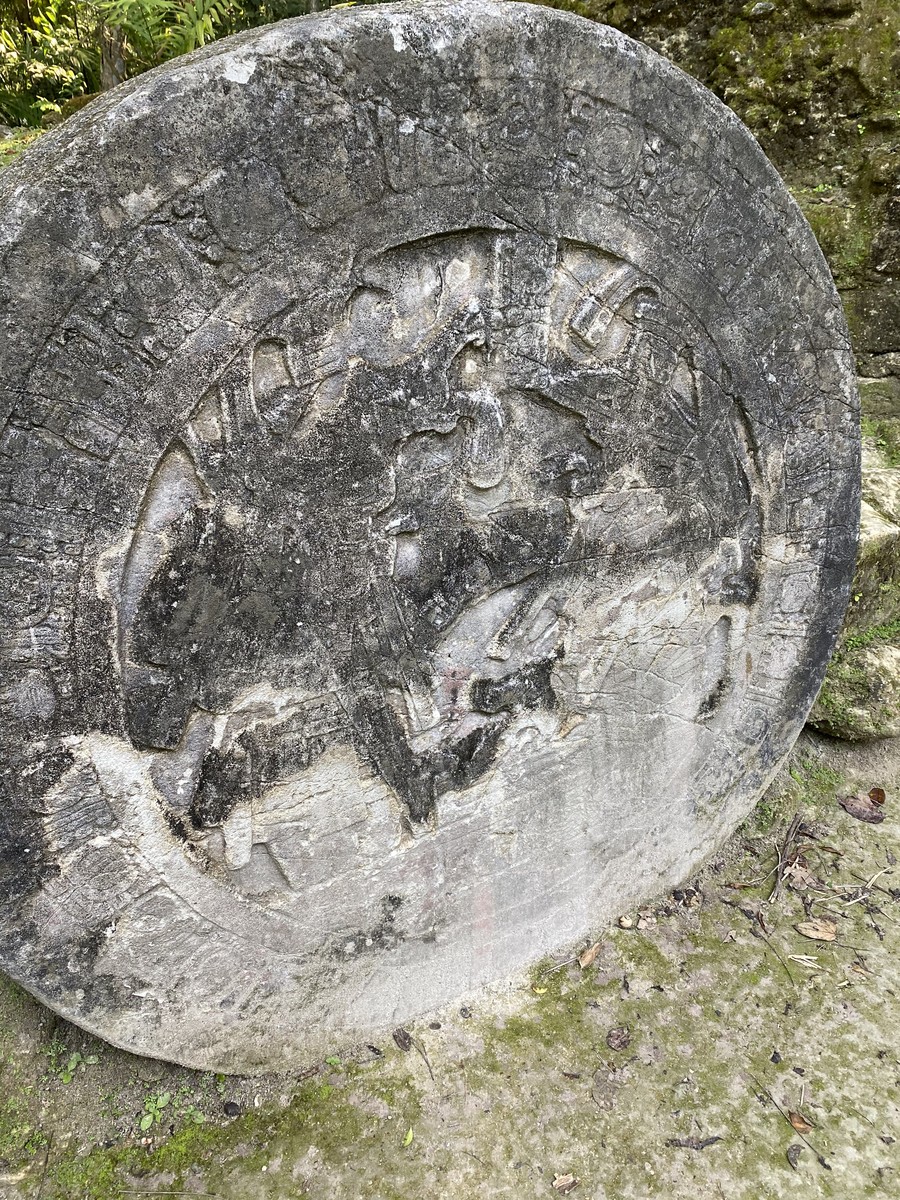 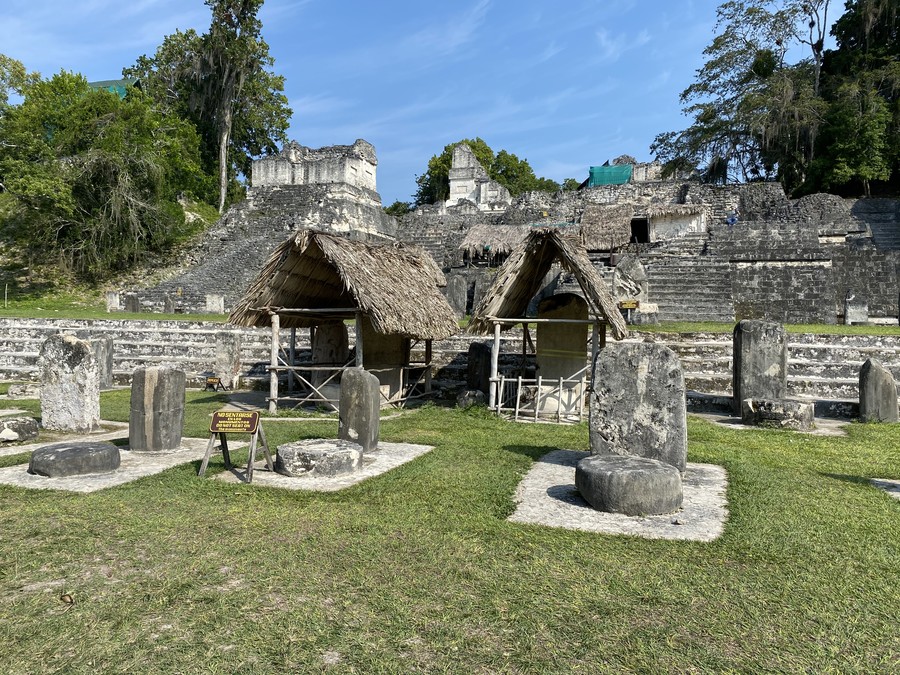 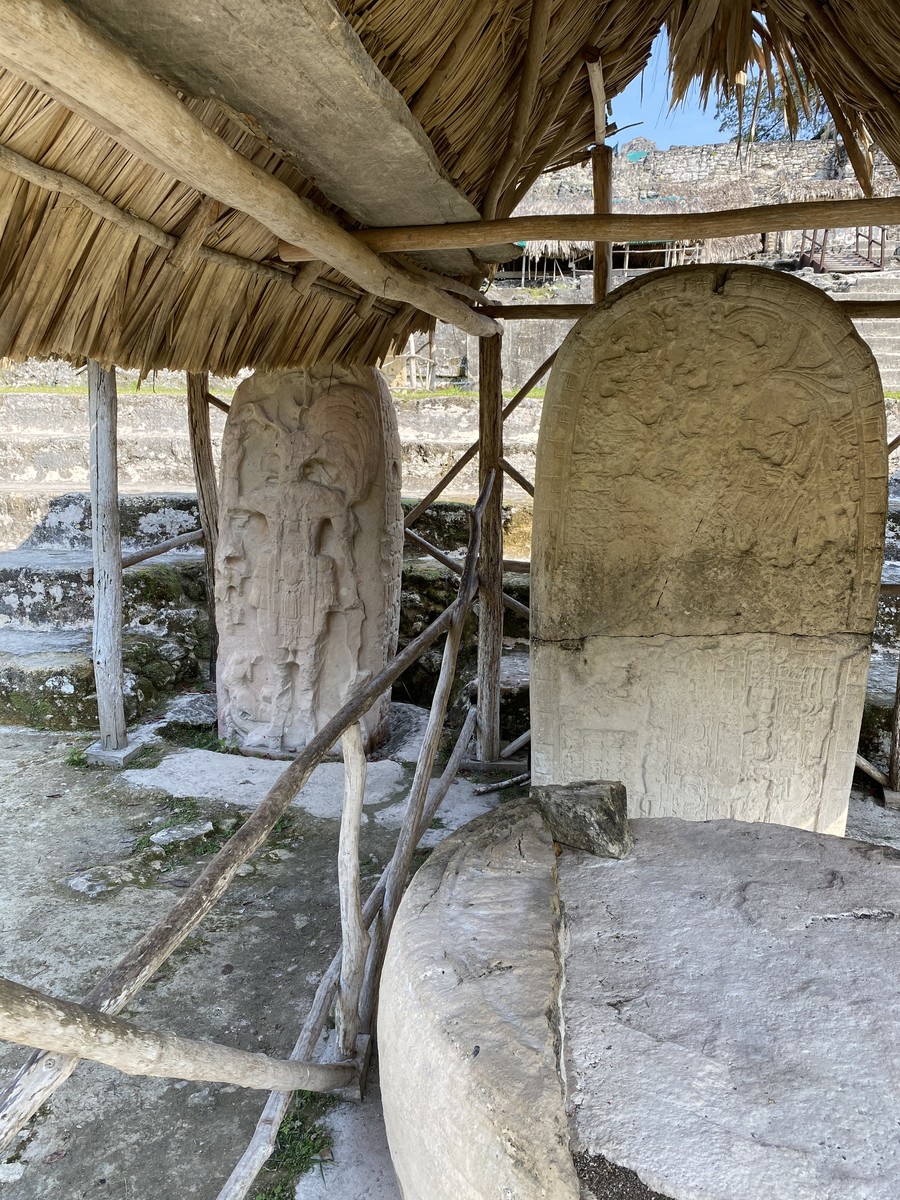 Now that the fog had cleared, I backtracked to several temples that were now worth the climb. 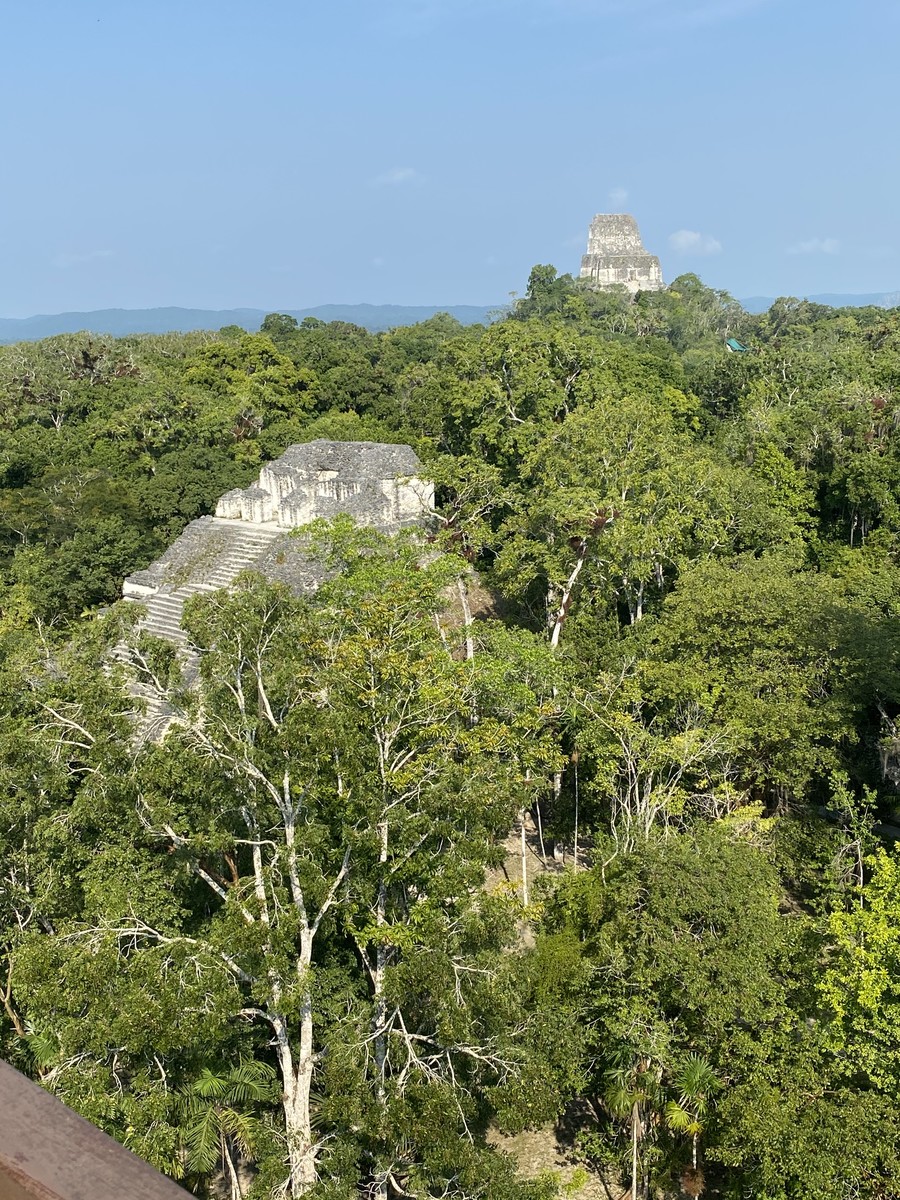 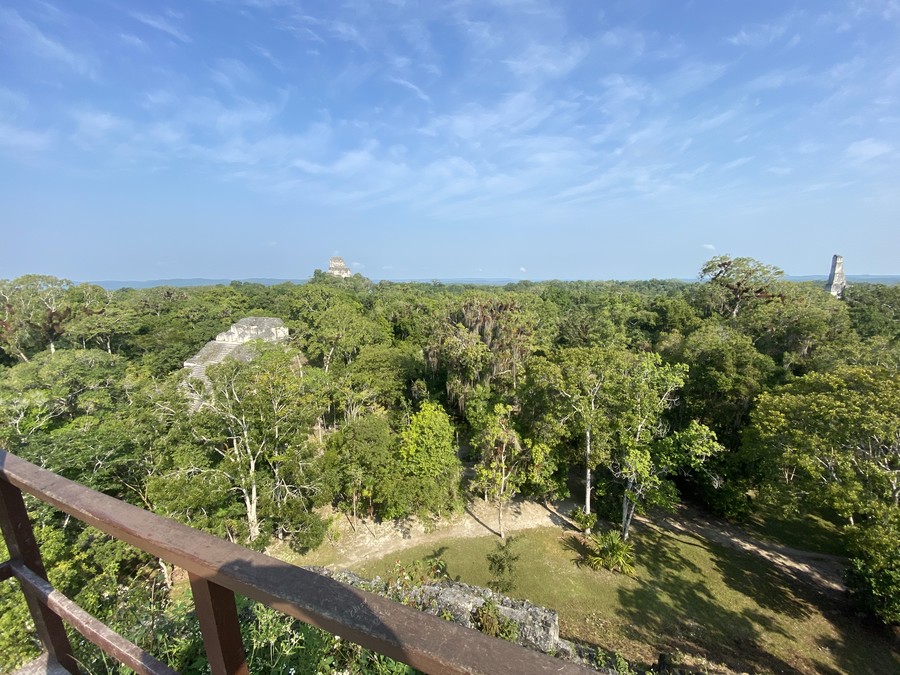 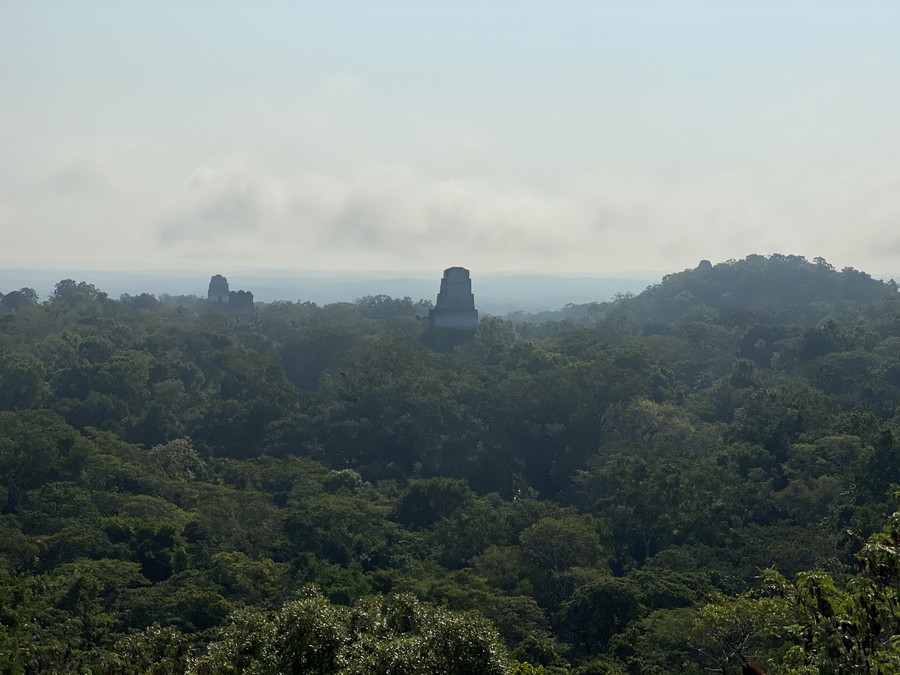 Of all the Mayan sites I have visited, Tikal is my favorite. The landscape, the towering temples, the wildlife, the amazing howler monkey experience… It all combines to make this an unforgettable experience.

If you are interested, you don’t have to endure the long route I took to get here. There are daily flights from Guatemala City to Flores, and many companies sell guided tours that will handle all of the details. You can do it all without knowing a word of Spanish. If you want to visit just one Mayan site, this is the one.

Well-earned relaxation, back in Flores

After spending six hours in the ruins, I rushed back to the room for a quick shower. I left the hotel just in time to catch an 11 AM colectivo with my prepaid return ticket. I headed back to Flores and relaxed for what remained of the day. Tomorrow would be another long travel day, and for me, a new country on my life list.